Critical Race Theory Is Being Institutionalized Throughout America 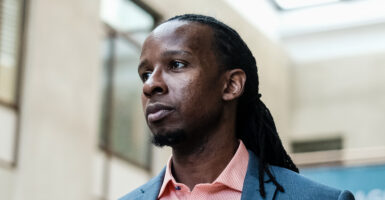 “When I see racial disparities, I see racism,” anti-racist Ibram X. Kendi, the Andrew W. Mellon professor in the humanities at Boston University, says. Pictured: Kendi stands for a portrait at American University's School of International Service following a panel discussion on his book "How to Be an Antiracist," in Washington, D.C., Sept. 26, 2019. (Photo: Michael A. McCoy/The Washington Post/Getty Images)

Americans are right to fight back against the racial fanaticism now invading American classrooms, workplaces, and even the White House. These misguided teachings, accepted as holy writ by their proponents, are premised on easily disprovable propositions.

The core propositions are the following: that the persistence of racial disparities are prima facie evidence of a racism so deep that it is systemic; that to destroy this racism, America’s culture must be reengineered through reeducation mini-camps; and the only way to close the gaps is through heavy-handed use of racially discriminatory “anti-racism” government policies. These are the underlying beliefs of critical race theory, which is now being institutionalized throughout society.

In workplaces, employees are being herded into “anti-racism” training programs resembling Maoist struggle sessions. Meanwhile, woke corporate executives jump to punish communities that have the gall to make decisions they don’t like.

Now, the Biden administration is making critical race theory our official state ideology. Its Department of Education has proposed prioritizing grants for courses that use critical race theory. President Joe Biden signed into law a loan forgiveness program that can be used by any farmer, except those who are white.

Clearly, we have returned to color-conscious government policymaking for the first time since passage of the 1964 Civil Rights Act.

At this point we must ask: “Are we rushing into dismantling the most prosperous, freest, most fair society in history because of vague and woolly premises that fail to stand up to scrutiny?”

Let’s take “systemic racism” first. For critical race theory proponents like Richard Delgado, racial disparities arise from a “prevailing mindset by means of which members of the dominant group justify the world as it is, that is, with whites on top and browns and blacks at the bottom.”

Or, as Ibram X. Kendi puts it, “When I see racial disparities, I see racism.”

The disparities, however, more likely result from choices that free Americans of all colors, now released from the yoke of government-imposed color-conscious policies, make for cultural reasons.

“Activists on the left of American politics claim that ‘white supremacy,’ ‘implicit bias,’ and old-fashioned ‘anti-black racism’ are sufficient to account for black disadvantage. But this is a bluff that relies on ‘cancel culture’ to be sustained,” says Brown University professor Glenn Loury. “The simple retort, ‘racism,’ is laughable—as if such disparities have nothing to do with behavior, with cultural patterns, with what peer groups value, with how people spend their time, with what they identify as being critical to their own self-respect.”

The research strongly backs up Loury. Columbia University professor Van C. Tran has looked at children of West Indian immigrants. They grew up in troubled neighborhoods, segregated from whites, and, because they lack a foreign accent, are seen as undifferentiated blacks by cops, storeowners, employers, landlords, teachers, etc. That is, they, too, face discrimination.

Yet the West Indians strongly outperform across eight important measures: high school dropout; unemployment; the NEET rate (Not in Education, Not in Employment, Not in Training); college graduate; professional attainment; arrest rate; incarceration rate, and teen pregnancy. In all but college graduate and professional attainment, second-gen West Indians are closing the gap with whites.

The reason, according to Tran, is the West Indian families use “different group-specific strategies” to navigate disadvantage. He identified three “cultural mechanisms that partially explain” West Indian success: “parenting strategies, involvement with the local drug trade, and neighborhood peer network.”

Tran’s study was specific to New York City, but studies elsewhere have produced the same results. If America were truly systemically racist, these black children of immigrants would not be able to achieve such better life outcomes. Any family of any background that adopts these policies will have a better chance of success.

Racial quotas and color-conscious policies do nothing to address the choices people make because of peer-group pressure. Nor do they address what Christopher Rufo identifies as the real drivers of American poverty, regardless of race: the “background variables of family structure, educational attainment, and workforce participation.”

In the short run, attempts to reengineer American culture or human nature through training sessions are likely to produce a backlash that could have ugly racial overtones. Ultimately, they are doomed to fail: Human nature is, after all, unchangeable.

The good news is that we don’t have to see society unravel, either because critical race theory proponents succeed at destroying the institutions that create freedom and prosperity, or through an ugly backlash. Already different states and nongovernment entities are rallying to fight critical race theory. The more we expose how it is based on nonsense, the better.