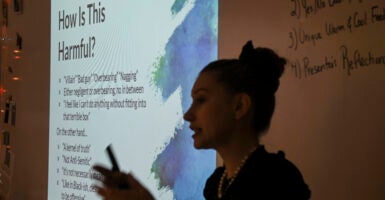 Parents in one of the nation’s largest school districts are being asked about how schools should teach their children about systemic racism, “multiple identities,” and ways to “challenge power and privilege.”

“One key strategy to achieve educational equity is to analyze and address the beliefs and policies that inform teaching practices along with what is taught in schools,” Schools Superintendent Scott S. Brabrand said in an email message introducing the survey to parents and teachers.

—“In FCPS students are taught to value other people’s multiple identities.”

—“Teaching methods (or teaching practices) address racism as often as they should.”

—“Teaching methods (or teaching practices) address multiple identities as often as they should.”

—“Teaching methods (or teaching practices) address race, racism, identity bias with students, then staff members should have clear guidance from the district about how to teach those topics.”

—“The curriculum used in FCPS should teach students how to challenge power and privilege.”

—“Teachers should have materials to guide them in creating anti-racist and anti-biased classroom environments.”

—“The teaching methods in FCPS should offer students ways to take action against racial and social injustice.”

The proposed policy has prompted controversy and some outrage among many Fairfax parents.

“Today, we get this vacuous survey from you, Dr. Brabrand, and you dare to tell us that you are going to consider removing the one policy that parents have to defend their students from indoctrination and activism, the policy that makes certain that anything taught in our school that is controversial must be presented fairly,” parent activist Asra Nomani said Thursday at a Fairfax County Board of Education meeting, addressing the superintendent.

Nomani added: “This survey, it’s just a loaded survey. And who is it by? Indeed, New York Leadership Academy. And what has that survey done, they’ve asked us the question—”

A school board member interrupted Nomani, cut her off several times, and told her that her time had expired.

The Leadership Academy, mentioned by Nomani at the school board meeting, says its mission is to “build the capacity of educational leaders at every level of the system to disrupt systemic inequities and create the conditions necessary for all students to thrive.”

The survey will help create a policy for equity and inclusion, Lucy Caldwell, the school district’s director of communications and community relations, told The Daily Signal in an email.

The public school district in Northern Virginia, which includes suburbs of Washington, D.C., is the 11th-largest school district in the United States, with 188,556 students enrolled, according to the National Center for Education Statistics.

The school district also regularly places high on lists of the “best” school systems in America.

Fairfax County long has been among the nation’s wealthiest counties. In December, it ranked No. 3 on U.S. News and World Report’s list of “The 15 Richest Counties in the U.S.” The county’s proposed school budget for 2021-2022 is $3.1 billion.

Advocates of “anti-racism” broadly define it as policies that bring “equity,” as opposed to the traditional meaning of opposing discriminatory policies or beliefs. This can include any policy that affects races disproportionately.

Anti-racism education has spread through many school districts across the United States.

Ibram X. Kendi, author of  the book “How to Be an Antiracist,” defines anti-racism as meaning that any differences between groups is entirely attributable to racism, and argues that a system that has different outcomes for different groups is racist. Kendi writes: “Racism itself is institutional, structural, and systemic.”

Opponents of “anti-racism” policies criticize them for, among other things, discriminating against whites and conservatives.

The Fairfax County school district is developing a plan and wants to incorporate community perspectives, Caldwell said in the email to The Daily Signal:

Changing attitudes, challenging inequality, and raising consciousness are not neutral matters. This is about authentically belonging in our schools and ensuring that all students and families feel welcomed, valued, and seen. We believe that engaging all stakeholders in authentic discussion and collecting their input will support more inclusive and equitable curricular policies.

The Daily Signal emailed or called all 12 members of the Fairfax County Board of Education on Friday for comment. A staff aide responded for one member, Abrar Omeish, referring media questions to the school system’s communications office.