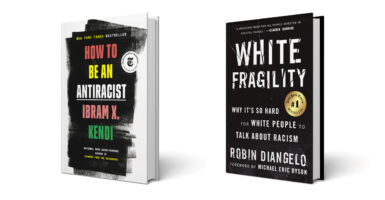 Two writers are shaping the modern discussion over “wokeness” and ideas that are becoming politically mainstream, at least on the American left. (Photo: The Heritage Foundation)

In our summer of discontent, of protests and then riots in what many view as a racial reckoning following the death of George Floyd at the hands of police, we’ve seen previously radical ideas such as defunding the police become the norm.

Not only that, we’ve seen liberal institutions such as The New York Times bow before “woke” mobs and cancel all who don’t conform to the whims of the radical left.

These trends haven’t happened in a bubble.

Two writers in particular have risen in popularity on the left, dominating national bestseller lists while gathering increased media attention: Robin DiAngelo, a lecturer and author of “White Fragility: Why It’s So Hard for White People to Talk About Racism,” and Ibram X. Kendi, director of the Center for Antiracist Research at Boston University and author of “How to Be an Antiracist.”

Although their works are distinct, both writers promote an ideology they call “anti-racism.”

These two authors are shaping the modern discussion over “wokeness” and the ideas that are becoming politically mainstream in America, at least on the American left.

It’s critical to have an understanding of what they believe.

For instance, why would a mob opposed to white supremacy attack statues of both a slaveholder and an abolitionist?

Is this an example of mindless, wanton destruction? Or perhaps the rioters are embracing a larger set of ideas that creates a ruthless dichotomy between racists and anti-racists?

Here are three key concepts to which the anti-racists have attached themselves.

According to both DiAngelo and Kendi, there really are only two paths any person may take: racism or anti-racism. Being “not racist,” as Kendi writes, is not good enough, nor does it mean one isn’t a racist.

DiAngelo defines “white fragility,” the topic of her book, as a process whereby white people return to “our racial comfort, and maintain our dominance within the racial hierarchy.”

“Though white fragility is triggered by discomfort and anxiety, it is born of superiority and entitlement,” DiAngelo writes. “White fragility is not weakness per se. In fact, it is a powerful means of white racial control and the protection of white advantage.”

Essentially, if a white person is uncomfortable talking about race or denies his fundamental whiteness, as well as his racism, he is guilty of white fragility.

In fact, according to the arguments of both DiAngelo and Kendi, even a denial of racism can be construed as evidence of racism.

As several other writers, including Mark Hemingway at The Federalist, have noted, this is what’s called a Kafka trap, a rhetorical device “where the more you deny something, the more it’s proof of your guilt.”

DiAngelo and Kendi promote a racial variation of common oppressor versus oppressed narratives, seen in many traditional left-wing ideologies. Marxist economic ideology revolving around class is more or less replaced by race in a scenario where there are only winners and losers.

Kendi and DiAngelo argue that racism is not just an individual act of discrimination or prejudice toward a person or a people based on their race.

Instead, racism is redefined as a collective condition leading to inequities in society.

Kendi argues that those whom many Americans see as actual racists are far less dangerous than the real threat of widespread acceptance of color blindness. He writes:

The most threatening racist movement is not the alt right’s unlikely drive for a White ethnostate but the regular American’s drive for a ‘race-neutral’ one. The construct of race neutrality actually feeds White nationalist victimhood by positing the notion that any policy protecting or advancing non-white Americans toward equity is ‘reverse discrimination.’

Kendi decries “assimilationists” as being essentially as bad as “segregationists.”

Assimilation is the process by which group differences are reduced or eliminated within a society to form a common culture.

Kendi opposes the assimilationists, as he defines them, because he says they attribute behavior to the unequal outcomes for different races.

In fact, even asking the question of why different groups of people have statistically differing outcomes in a society may be construed as racist.

DiAngelo adopts Kendi’s construction of racism, writing that “if we truly believe that all humans are equal, then disparity in condition can only be the result of systemic discrimination.”

The argument essentially is that any racial discrepancies in society are examples of racism.

So, if a society has a disproportionate number of rich white people compared to rich black people, that is racism. If one race has a higher mortality rate from a disease than another, again the culprit is racism.

Kendi is, of course, highly selective in the statistics he cites to demonstrate that “there may be no more consequential White privilege than life itself.”

As Coleman Hughes wrote for City Journal: “By selectively citing data that show blacks suffering more than whites, Kendi turns what should be a unifying, race-neutral battle ground—namely, humanity’s fight against deadly diseases—into another proxy battle in the War on Racism.”

2. Colorblindness Is the Problem, and Racist

The concept of equal opportunity is fundamentally rejected by the doctrines of DiAngelo and Kendi. They argue that in a deeply racist society conditioned to white supremacy, equal opportunity under the law perpetuates only more inequality.

Both DiAngelo and Kendi rebuke the idea of colorblindness in how we treat race. DiAngelo does so more in a cultural sense. She argues that colorblindness is essentially a sign of white privilege, a manipulation of the message of Martin Luther King Jr. to perpetuate more racism.

“Color-blind ideology makes it difficult for us to address these unconscious beliefs,” DiAngelo writes. “While the idea of color blindness may have started out as a well-intentioned strategy for interrupting racism, in practice it has served to deny the reality of racism and thus hold it in place.”

The way for white people to do this is by recognizing, embracing, and critically examining collective “white identity” as an antidote to white fragility. DiAngelo writes that “as an insider,” she can speak for the white experience, but that she uses her white identity as a way to “challenge racism.”

DiAngelo lays on white people the responsibility—the burden, one might say—of attacking and defeating racism and “whiteness.”

3. Racism Is Solved Through Discrimination

Kendi leans more strongly into creating laws that specifically promote anti-racism. To be effective, he says, they must be discriminatory.

Discriminatory laws, Kendi argues, can be desirable and in fact necessary as a way to promote equity:

As long as the discriminatory finger is on the button of “equity,” however Kendi and the anti-racists define it, it is good.

Christopher Caldwell, author of “The Age of Entitlement: America Since the Sixties,” wrote for National Review that Kendi rejects the notion—stemming from many civil rights advocates—“that everything will be well as long as we treat people with equality, neutrality, and respect.”

“It is illegitimate. It is a ‘racist’ obstruction,” Caldwell added.

Kendi proposes an anti-racist amendment to the Constitution, which he wrote about in a short piece in Politico. It’s worth quoting in full:

To fix the original sin of racism, Americans should pass an anti-racist amendment to the U.S. Constitution that enshrines two guiding anti-racist principals [sic]: Racial inequity is evidence of racist policy and the different racial groups are equals.

The amendment would make unconstitutional racial inequity over a certain threshold, as well as racist ideas by public officials (with ‘racist ideas’ and ‘public official’ clearly defined). It would establish and permanently fund the Department of Anti-racism (DOA) comprised of formally trained experts on racism and no political appointees.

The DOA would be responsible for preclearing all local, state, and federal public policies to ensure they won’t yield racial inequity, monitor those policies, investigate private racist policies when racial inequity surfaces, and monitor public officials for expressions of racist ideas. The DOA would be empowered with disciplinary tools to wield over and against policymakers and public officials who do not voluntarily change their racist policy and ideas.

This proposal by Kendi effectively would end self-government and nullify the Bill of Rights. A cadre of intellectuals ensconced in the Department of Anti-racism would have the power to decide who can and can’t run for office, and which laws can or can’t be passed based on their interpretation of what is racist.

Again, racist being defined by Kendi as “one who is supporting a racist policy through their actions or inaction or expressing a racist idea.”

Which policies fall under the rubric of being racist or anti-racist?

“Every policy in every institution in every community in every nation is producing or sustaining either racial inequity or equity,” Kendi writes.

For those who believe they can escape the ugly culture war implications of these ideas and focus on economic or fiscal policies, it’s worth noting that embracing socialism and fighting capitalism is a critical element in promoting anti-racism.

And you will oppose capitalism, or else.

On top of that, this agency would have the power to void passage of a lower capital gains tax in Congress.

Gone are notions of individual rights or limited self-government. Gone are constitutional protections of freedom of speech and association.

Gone is the very bedrock of the system created by the Founders, the Constitution that has bent the flawed but exceptional American system toward liberty and justice.

We have a word for such a law: tyranny.