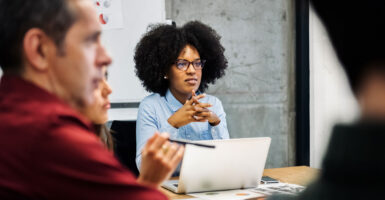 The admirable cause of “anti-racism” is fueling, in some corners, the inclination to denounce universal virtues and useful skills as the product of “white culture.” (Photo: Hinterhaus Productions/Getty Images)

Frederick Hess is the director of education policy studies at the American Enterprise Institute.

R.J. Martin is the program manager of education at the American Enterprise Institute.

In the wake of the police killing of George Floyd and subsequent protests over police brutality, interest in “anti-racist” education has exploded among educators and advocates.

The case that educators should seek to combat racism seems self-evident. What’s less clear is how the admirable cause of “anti-racism” is fueling, in some corners, the inclination to denounce universal virtues and useful skills as the product of “white culture.”

Witness the recent contretemps at the Smithsonian’s National Museum of African American History and Culture. The museum, which bills itself as “the only national museum devoted exclusively” to educating the public on these topics, recently debuted the online guide “Talking About Race.”

The guide included a chart cataloging the “aspects and assumptions” of “white culture” that “have been normalized over time and are now considered standard practices in the United States.”

What are these sinister aspects of “white culture,” you ask?

Well, according to the Smithsonian, values such as “hard work,” “self-reliance,” “be[ing] polite,” and timeliness are all a product of the “white dominant culture.” Indeed, it turns out that conventional grammar, Christianity, the notion that “intent counts” in courts of law, and the scientific method and its emphasis on “objective, rational linear thinking” are all proprietary to “white culture.”

Several things might be said about all this. But the place to start may be by observing just how insidious it is to teach black children to reject intellectual and personal traits that promote personal and civic success—in the U.S. or anywhere else.

After all, in what land are students well served when they’re encouraged not to work hard, make decisions, think rationally, or be polite and on time?

A poll by the National Association of Colleges and Employers found that 4 out of 5 employers expected job applicants to exhibit a strong work ethic, the ability to work in a team, and analytical thinking skills.

This all makes obvious sense. These are the traits that make for good neighbors and colleagues, and support strong communities. Perhaps we’ve got blinkered vision, but we’re still looking for the culture, anywhere, where parents say that they’d like their children to slack off, be rude, and shirk responsibility.

After an online outcry, the Smithsonian removed the chart July 16—but not with any denunciation of the chart’s content, only the bland understatement that the chart turned out to “not contribute to the productive discussion” museum officials had wished for.

Of course, the lack of “productive discussion” shouldn’t have surprised, given the shoddy scholarship it reflected. The original chart contained a single footnote linking to a one-page PDF asserting, sans evidence, that traits such as “hard work,” “self-reliance,” and politeness “are common characteristics of most U.S. white people most of the time.”

Not surprisingly given this foundation, the Smithsonian’s chart was rife with dubious claims and questionable assumptions. The idea that Christianity belongs to white culture could come as a surprise to the 72% of black Americans who identify as Christian, especially when a lower percentage, 65%, of white Americans do so.

The idea that timeliness and objectivity are the province of white culture would probably come as a surprise to air traffic controllers or cardiovascular surgeons in Cambodia and Cameroon, as it turns out that these traits are crucial to their professional competence and success—whatever the practitioner’s race or culture.

While it might be tempting to laugh off the Smithsonian’s chart as political correctness run amok, that would be a mistake.

The troubling conviction that admirable, useful, universal values such as hard work and politeness are somehow the product of “white supremacy” has been gaining increasing currency in education circles.

Just this month, the influential KIPP charter network announced it was abolishing its motto “Work Hard. Be Nice.” as part of its push to “dismantle systemic racism.” As educators rush to act upon the admirable impulse captured by “anti-racism,” the lesson is that they need to be extraordinarily deliberate about what that means in practice.

When all is said and done, in 2020, the Smithsonian’s caretakers chose to tell our children that values such as hard work and rationality are part of the “white” inheritance—and don’t come naturally to those raised in other cultures.

If this demeaning caricature was offered up by drawling good ol’ boys defending Jim Crow in some grainy newsreel footage, we’d spot it for the unapologetic racism that it is. The question of the hour, though, is what we call it when educators offer it up in the name of “anti-racism.”