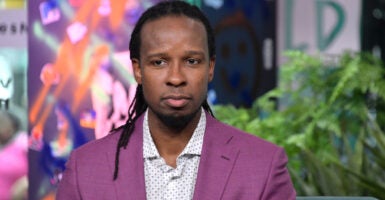 It’s remarkable how much the so-called ideology of “anti-racism” itself sounds racist.

At one time, racism was generally defined as hatred or bigotry toward people of other races. Now, to hear the woke tell it, providing children of a different race and nationality a loving adoptive home is the real racism, and just another example of colonizing and stripping people of their humanity.

Given the gutter politics employed by the left in Supreme Court Justice Brett Kavanaugh’s confirmation battle in 2018, we shouldn’t be surprised that President Donald Trump’s nominee to replace the late Justice Ruth Bader Ginsburg on the high court is being attacked with personal and malicious smears.

Judge Amy Coney Barrett, who currently serves on the U.S. Court of Appeals for the 7th Circuit, was nominated Sept. 26 by Trump for elevation to the Supreme Court. It didn’t take long for progressive detractors to attack her Catholic faith, of course.

We got a preview of that in her circuit court confirmation hearings back in 2017.

Sen. Dianne Feinstein, D-Calif., said to Barrett that “the dogma lives loudly within you”—as though it’s problematic for a person to be a serious Catholic and still serve on the Supreme Court.

But now Barrett’s children are coming under attack, and she is being called a “racist.” She is the mother of seven children, two of them adopted and originally from Haiti.

Haiti has struggled through political turmoil and poverty for much of its history. Despite immense amounts of foreign aid, it’s still the poorest country in the Western Hemisphere.

Starvation is common in Haiti, and many children suffer under deplorable conditions virtually unheard of in the United States. Child slavery continues to be a huge problem as desperate mothers sell their children to survive.

But a white mother adopting two Haitian children is problematic, according to Ibram X. Kendi.

Kendi is the director of the Center for Antiracist Research at Boston University and the author of “How to Be an Antiracist.”

He’s been elevated by the media, especially in the past year, as a leading intellectual of the “anti-racist” movement. Fairfax County, Virginia, schools in August paid Kendi $20,000 to have him speak for an hour via teleconference to school leaders and administrators.

It should perhaps come as no surprise that Richard Spencer, a white nationalist, agrees with Kendi.

“This is where racial identitarianism gets you,” wrote conservative columnist Rod Dreher for The American Conservative, adding:

The fact that Richard Spencer, the white supremacist who advocates for a white ethnostate, agrees with Ibram Kendi tells you something important about the malign roots of Kendi’s ‘anti-racist’ philosophy.

These guys are two sides of the same coin—except one is a pariah, and the other runs an endowed center at Boston University and has become the most influential public intellectual in American life today.

Kendi’s ideology—not Barrett’s adoptions—is what strips people of their humanity.

As I wrote in a review of Kendi’s book, the anti-racist movement isn’t really about eliminating racism. It’s about redefining it. It’s about making every issue in American life boil down to racial identity. It’s about solving “inequity” through discrimination.

Every issue is to be viewed through the lens of racism or anti-racism, and there’s no room for nuance or even debate.

Kendi’s ideas, like those of white nationalists, stand in opposition to the principles of the Declaration of Independence that “all men are created equal.” His policy proposals would utterly destroy liberty and self-government under the Constitution, and would put the country under the yoke of absolute tyranny.

Yet, despite the malignancy of those views and their radical conclusions, they are being elevated by corporate titans and media giants, such as Twitter.

What sort of “policy change” can we expect from a man who lambastes mixed-race adoption and supports creating an unaccountable federal agency with the power to disenfranchise our representatives (which is what his proposed anti-racist constitutional amendment would do)?

Still, it’s unsurprising that Barrett is facing the most vile and malignant attacks, given the importance of the now vacant seat on the Supreme Court.

While many of the assaults on Barrett’s faith and character will be nothing more than personal mudslinging for political purposes, it’s important to understand the deeper ideology behind the attacks by Kendi and others.

Our most powerful media and cultural institutions have facilitated the rise of a minority of radical left-wing intellectuals to create the moral framework for how Americans are judged in the public square.

That, among other things, is why the culture war has become so intense in 2020, and why it’s unlikely to calm down anytime soon.

It’s not just about a single Supreme Court seat. It’s a conflict over how to define the very nature of America and the future of our society and institutions.