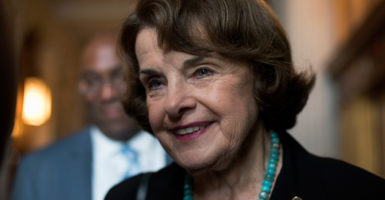 Amy Barrett, Trump’s nominee for the 7th U.S. Circuit Court of Appeals, was questioned about her Catholic faith by Feinstein at a confirmation hearing Sept. 6.

“The dogma lives loudly within you, and that’s a concern,” Feinstein said at the hearing.

The questioning made headlines, and Sunday on CNN’s “State of the Union,” Feinstein defended herself, saying that she attended Catholic schools for four years when growing up.

“I think Catholicism is a great religion,” Feinstein said on the show. “I have great respect for it. I’ve known many of the archbishops that have been in my community.”

Feinstein said she has spoken with the archbishops for decades and said she has “tried to be helpful to the church.” She said Barrett, a Notre Dame law school professor, doesn’t have any court experience and doesn’t have a record.

“She’s a professor, which is fine, but all we have to look at are her writings, and in her writings, she makes some statements, which are questionable,” the California Democrat said.

Feinstein couldn’t recall the direct quote that worried her from Barrett, but paraphrased Barrett in saying that “a Catholic judge cannot be independent.”

Travis Weber, director of the Center for Religious Liberty at the Family Research Council, took issue with Feinstein’s comments.

“Sen. Feinstein should apologize for singling out Amy Barrett because of her religious beliefs,” Weber said. “Feinstein’s continued defense of her line of questioning does not hold water. The article co-authored by Amy Barrett that Feinstein claims to have concerns about expressly takes the position that a Catholic should recuse themselves when their religious beliefs conflict with the law.”

The Judicial Crisis Network, an organization that promotes limited government and “a fair and impartial judiciary,” launched an ad campaign Saturday against what it called Feinstein’s “religious litmus test.”

“More than one out of every five Americans is Catholic, and that includes a growing Latino population,” said Carrie Severino, chief counsel and policy director of the Judicial Crisis Network. “A nominee’s faith should have nothing to do with his or her qualifications to be a federal judge. Period.”

“When it comes to the federal courts, the white supremacist in the White House is winning,” the CREDO website says. “Donald Trump is setting a record pace of nominating young, extreme right-wing judges for lifetime appointments to the bench.”

Democracy for America had a similar message on its petition page aimed at stopping the Senate Judiciary Committee from confirming Trump’s judicial nominees.

“Republican senators, with the help of some Democrats, are upending Senate precedent to jam through those nominees as fast as possible,” it said.

The Daily Signal sought comment from CREDO and Democracy for America, but neither responded by publication deadline.