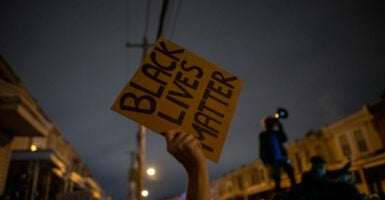 Equality is out and “equity” is in.

The San Diego Unified School District has approved a change to its grading system that coincides with broader ideas of restorative justice and “anti-racism.”

It will do this by no longer letting late assignments and bad behavior in the classroom affect grades. Students also won’t be penalized for not showing up to class at all.

Only “mastery” of a subject, whatever that means, will count for grading purposes. Students will also receive a separate grade for “citizenship.”

The San Diego Unified School District’s policy change is consistent with the Obama administration’s push to crack down on racial disparities in school discipline through legal threat.

The Trump administration and Education Secretary Betsy DeVos rescinded that policy, but school districts can still choose to follow the policies if they wish to.

The San Diego Unified School District concluded that the disparity in its schools must be a product of racism, or at least insufficient “anti-racism.”

“This is part of our honest reckoning as a school district,” San Diego Unified School District Vice President Richard Barrera said to a local San Diego NBC affiliate. “If we’re actually going to be an anti-racist school district, we have to confront practices like this that have gone on for years and years.”

It must be noted that the ideology of anti-racism, popularized by intellectuals like Ibram X. Kendi, is based strongly on critical race theories and other ideas once consigned to the radical fringe of college campuses.

Broad trends in behavior leading to unequal outcomes, according to the anti-racists, must inherently be a product of racism. No other explanation is acceptable.

While there may be some justification for treating late assignments and misbehavior in classrooms differently than subject grades, one wonders how better outcomes for minority students are ultimately being promoted by this change?

As Virginia Walden Ford, a visiting fellow at The Heritage Foundation, explained on a Heritage panel in 2018, breakdowns in classroom discipline create a terrible classroom environment for children who want to learn.

Walden Ford, who was one of the black students chosen to help integrate Arkansas schools in the 1960s and is the subject of the movie “Miss Virginia,” explained how a school program she ran in Arkansas was made worse by the changes to disciple policies.

Students who wanted to learn were made to feel unsafe “because the kids that were creating a lot of the discipline problems” got “a slap on the hand” instead of real punishments.

The result is that misbehaving students kept misbehaving, and other students had a tougher time because classrooms were out of control.

This seems to be a bad way to go about helping students who are struggling in the classroom.