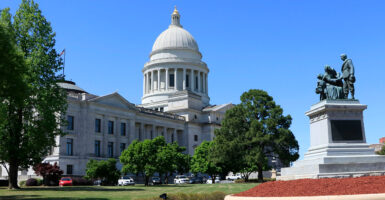 Republican Arkansas Gov. Asa Hutchinson allowed legislation to become law without his signature Monday that ends the use of critical race theory education for state agencies.

Hutchinson effectively approved SB 627 Monday, “an act to prohibit the propagation of divisive concepts” and “to review state entity training materials.” The legislation bans state agencies from teaching “divisive concepts,” including anything saying that the U.S. is fundamentally sexist or racist.

The law will take effect next year but does not apply to colleges, universities, public schools, local governments, or law enforcement training, according to The Associated Press.

“The bill does not address any problem that exists, and the paperwork and manpower requirements are unnecessary,” Hutchinson said in a statement, the publication reported.

Critical race theory holds that America is fundamentally racist, yet it teaches people to view every social interaction and person in terms of race. Its adherents pursue “antiracism” through the end of merit, objective truth, and the adoption of race-based policies.

“Here’s the problems with the critical race theory that they’re peddling. They’re saying all of our institutions are bankrupt and illegitimate. OK, so how do you have a society if everything in your society is illegitimate?” DeSantis asked. “It’s a harmful ideology. I’d say a race-based version of a Marxist-type ideology.”

“We won’t put any taxpayer dollars to critical race theory and we want to treat people as individuals, not as members of groups,” he said.

Hutchinson did not immediately respond to a request for comment from The Daily Caller News Foundation.