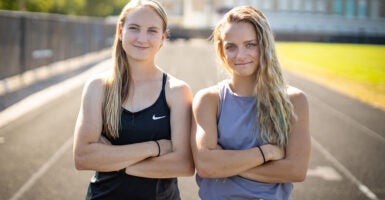 Idaho State University cross-country and track athletes Mary Kate Marshall (left) and Madison Kenyon are defending Idaho’s Fairness in Women’s Sports Act because they believe girls and women should have the opportunity to compete on a level playing field. (Photo: Alliance Defending Freedom)

College track and cross-country athlete Madison Kenyon has been forced to compete against a biological male on five occasions. She lost every time.

“Losing unfairly to someone who has natural advantages is frustrating and unmotivating,” said Kenyon, a sophomore at Idaho State University, at a press conference after a court hearing on the legality of Idaho’s Fairness in Women’s Sports Act.

Idaho Gov. Brad Little signed the Fairness in Women’s Sports Act into law March 30, 2020. The legislation recognizes the biological difference between men and women, and establishes that “athletic teams or sports designated for females, women, or girls shall not be open to students of the male sex.”

The American Civil Liberties Union challenged the Idaho law before it went into effect, claiming it is unconstitutional.

The ACLU filed a lawsuit on behalf of transgender Boise State University student Lindsay Hecox and an anonymous female athlete who claims concerns that she will be forced to prove she is female under the legislation due to her masculine build.

In August 2020, U.S. District Court Judge David Nye of Idaho issued a preliminary injunction on the Fairness in Women’s Sports Act, temporarily halting its enforcement, and in turn allowing biological males who “identify” as women to compete on women’s sports teams.

Monday’s hearing of the case Hecox v. Little before the 9th Circuit Court sought to determine whether or not Idaho can legally prevent transgender individuals from competing on women’s sports teams.

“Our arguments are based on well-established science about the differences between male bodies and female bodies,” Alliance Defending Freedom senior counsel Roger Brooks said in a statement.

“The Fairness in Women’s Sports Act is not just constitutional; it’s necessary to protect the rights of women and girls. Both the law and simple fairness make the answer clear: Idaho’s law should be reinstated and allowed to stand,” Brooks said.

“I’m just a 20-year-old girl, and I just want to be able to compete,” Hecox said, according to NPR, adding that “it was just so blatantly wrong for politicians to legislate this.”

ACLU attorney Chase Strangio represented Hecox at Monday’s hearing and argued that the participation of transgender athletes in female sports is not at odds with the rights of women and girls.

“Transgender individuals represent less than half of 1%” of the population, Strangio said, contending that “there is simply no way, based on numbers alone, that there can be substantial displacement” of female athletes.

The ACLU attorney added that across America there have been just four transgender athletes “who have had any success at any level … [and] none of those athletes are currently competing.”

Hecox v. Little is not the first case of its kind to be tried in federal court. In March, the Alliance Defending Freedom represented female track athletes Chelsea Mitchell, Selina Soule, Alanna Smith, and Ashley Nicoletti before the U.S. District Court for Connecticut. The case, Soule v. Connecticut Association of Schools, sought to prevent biological males from competing in female sports in the state of Connecticut.

Ultimately, the district judge dismissed the Connecticut case because the two transgender athletes who competed against the four female athletes have now graduated and no longer pose a hurdle to the female athletes in track competitions.

The decision in the Connecticut case does raise a question of whether or not the 9th Circuit might view the Idaho case in a similar light. Hecox is currently on a break from school and has not provided the court with a declaration of intent to return to Boise State University, but Strangio said Hecox does plan to return to school and try out for the track team.

At the press conference after the hearing, The Daily Signal asked the Alliance Defending Freedom lawyer whether he’s concerned that the 9th Circuit would declare the Idaho case moot as the district court in Connecticut had done in the case of Soule v. Connecticut Association of Schools.

“I do have that concern, and one of the judges raised that during the argument,” Brooks said, but explained why the court should rule on the Idaho case.

Our view is that this is a situation that is live and is going to be an ongoing challenge facing girls and women in Idaho education—high school and college. So, we are hopeful that the appeals court will not consider this dispute to be moot. We think it is right to be resolved and important to be resolved.

The states of Alabama, Alaska, Arkansas, Indiana, Kansas, Kentucky, Louisiana, Mississippi, Montana, Nebraska, Oklahoma, South Carolina, Texas, and West Virginia argue in their brief that the act “does not draw distinctions based on transgender status, and in fact, it treats an athlete’s gender identity as irrelevant.”

“Nor did Idaho’s legislature enact the statute for the invidious purpose of discriminating based on transgender status. Rather, its purpose is to ensure equal opportunities for women in athletics,” the brief states.

Idaho athlete Kenyon said she “joined this lawsuit to protect [the Fairness in Women’s Sports Act] because I knew it was an opportunity to be a voice for girls I compete with and the future generations of girls who will fall in love with sports.”

“We are asking the court to see us the same way as the lawmakers in Idaho did—as women who deserve a fair chance to compete in the sport that we love,” she said.