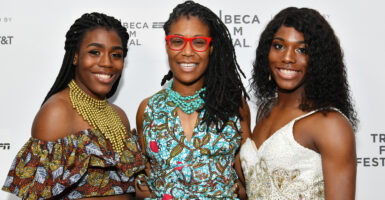 The since-graduated biological male high school athletes at the center of a federal lawsuit in Connecticut, Andraya Yearwood, left, and Terry Miller, right, are joined by Yearwood's mother, Ngozi Nnaji, at a film screening of "Changing the Game," a documentary about transgender high school athletes, at the Tribeca Film Festival on April 26, 2019, in New York City. (Photo: Dia Dipasupil/Getty Images)

Can a judge who orders plaintiffs’ counsel to call biological boys “females”—even though the very nature of the Title IX lawsuit involves questions of males’ competitive advantage in scholastic sports—render an impartial ruling on defendants’ motion to dismiss the suit?

It would seem the answer is “no.”

A federal district court judge in Connecticut on Sunday dismissed a lawsuit that had been filed by four female high school track athletes who have been fighting since 2019 to keep biological boys from competing in girls scholastic sports.

The lawsuit was brought against the Connecticut Association of Schools (operating as the Connecticut Interscholastic Athletic Conference), as well as the public school boards of education in Bloomfield, Cromwell, Glastonbury, Canton, and Danbury, Connecticut.

Counsel for the female athletes, the Alliance Defending Freedom, has indicated its intention to appeal the ruling by U.S. District Court Judge Robert Chatigny, an appointee of President Bill Clinton.

The plaintiffs’ legal journey began with the filing of a complaint under Title IX of the Civil Rights Act with the Office for Civil Rights at the U.S. Department of Education. That office initiated an investigation and found a violation, which led to litigation initiated by the Justice Department under President Donald Trump.

Recently, however, the Biden administration’s education secretary, Miguel Cardona, ordered the withdrawal of its enforcement litigation against the schools.

In March 2020, in a separate lawsuit brought by the Alliance Defending Freedom on behalf of the four track athletes against the schools, then-Attorney General William Barr had signed a statement of interest, as had the Office of Civil Rights. But in February, both the Justice Department and the Department of Education withdrew their support for the lawsuit.

Cardona, who expressed support for transgender athletes during his Senate confirmation hearing, was undoubtedly instrumental in the position switch. From the outset, the Connecticut Association of Schools has stated that it was simply following the state’s anti-discrimination policy in opening girls sports to biological boys.

Transathlete.com says that Connecticut is one of 16 states with “friendly policies that help facilitate full inclusion of trans/non-binary/GNC (gender non-conforming) students in high school athletics.”

For many, the dismissal of this high-profile case is a discouraging gut-punch in the battle to maintain Title IX’s hard-fought protections for girls and young women as they pursue educational opportunities within sports and scholarship—to say nothing of what Title IX’s unilateral expansion to biological boys would do to locker rooms, bathrooms, and other private spaces.

While often cited as the basis for an overly broad and knee-jerk expansion to the whole canon of federal civil rights law in bills like the Equality Act, the often overlooked fact remains that in his majority opinion in 2020’s landmark letdown, Bostock v. Clayton County, Supreme Court Justice Neil Gorsuch clarified that the ruling on Title VII’s expansion of “sex discrimination” to include sexual orientation and transgender status was not to be construed as applicable to other federal civil rights laws:

In his ruling dismissing the plaintiffs’ case, Chatigny indicated that “[t]he request to enjoin enforcement of the [Connecticut Interscholastic Athletic Conference] policy has become moot due to the graduation of [transgender athletes Andraya Yearwood and Terry Miller], whose participation in girls’ track provided the impetus for this action.”

In determining that the plaintiffs had failed to demonstrate the case was still ripe for determination relative to the principal form of relief at issue—an injunction preventing enforcement of the Connecticut school policy—the judge noted that two of the plaintiffs (Selina Soule and Chelsea Mitchell) had also graduated and were no longer eligible to compete in school sports.

As for the two other female athletes, Alanna Smith and Ashley Nicoletti, who are still students in the associated school districts and have another year of eligibility, the judge said the plaintiffs had requested application of a too-strict standard for determinations of mootness.

All that was required for claims of mootness, Chatigny stressed, was whether “the issues presented are no longer ‘live’ or the parties lack a legally cognizable interest in the outcome.”

Because there was “no indication that Smith and Nicoletti will encounter competition by a transgender student in a [Connecticut Interscholastic Athletic Conference-sponsored] event next season” and no one could identify transgender athletes who would be participating against Smith and Nicoletti in girls track next year, the judge concluded that their claims, too, were moot.

And what about the possibility that transgender athletes could be late entries into the girls track program?

Chatigny had an answer for that, too: A “legally cognizable injury to these plaintiffs would depend on a transgender student running in the same events and achieving substantially similar times.”

If it looks like Chatigny was straining for a pretext to dismiss the suit, it’s because he most likely was.

It’s worth noting that from the outset of the litigation, Chatigny’s political preferences were clear. During the course of litigation, he ordered the Alliance Defending Freedom attorneys for the plaintiff female athletes to refer to the transgender athletes as “females” in a blistering rebuke during a conference call in May 2020.

Plaintiffs’ attorney Roger Brooks countered that the biology of the trans-identifying male athletes is precisely the reason they possess an advantage over the female athletes, and later filed a motion to disqualify Chatigny for “judicial bias.”

In his order Sunday granting defendants’ motion to dismiss, Chatigny referred to this incident in a footnote on Page 5:

Plaintiffs moved for my recusal on the ground that I had demonstrated bias by calling on plaintiffs’ counsel to refrain from continuing to refer to Yearwood and Miller as ‘males,’ which I regarded as needlessly provocative.

Plaintiffs’ counsel argued that this usage was necessary because the present action concerns the effects of biological differences between persons born male and persons born female.

Understanding that language shapes both law and policy, the accurate identification of Yearwood and Miller as “biological males” provides the basis upon which the four female athletes’ claims of competitive disadvantage rest.

It seemed obvious from the outset that Chatigny would ultimately dismiss the lawsuit. Perhaps the judges for the U.S. 2nd Circuit Court of Appeals will approach the case with the judicial impartiality and textual fidelity required of members of the bench.

The headline of this article has been corrected to reflect that the suit was against brought against the Connecticut Association of Schools (operating as the Connecticut Interscholastic Athletic Conference), as well as the public school boards of education in Bloomfield, Cromwell, Glastonbury, Canton, and Danbury, Connecticut.