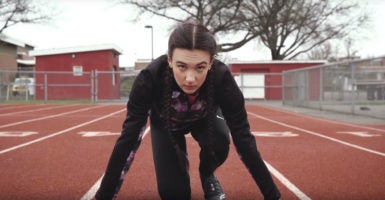 "What I’m saying is you must refer to them as ‘transgender females’ rather than as ‘males,’" a federal judge tells lawyers for Connecticut high school athletes Selina Soule, Alanna Smith, and Chelsea Mitchell. Pictured: Soule, who missed qualifying for the New England track and field regionals by two spots in her top event after two biological males beat her time. (Photo: The Daily Signal)

A federal judge in a high-profile Title IX case has ordered lawyers representing four girls track stars to refer to two biological males who outraced them as “transgender females.”

The lawyers from Alliance Defending Freedom who represent the four high school girls filed a motion Friday arguing that the judge should recuse himself because he has shown that he is unable to be impartial.

Selina Soule, Alanna Smith, Chelsea Mitchell, and Ashley Nicoletti argue in the case that being forced to compete with biological males who identify as girls poses significant, unfair physiological advantages to them.

District Judge Robert Chatigny’s insistence that the four girls’ lawyers use specific language that all but endorses the other side in the case prejudges those who maintain that Title IX protections shouldn’t be extended to those who “identify” as girls or women.

During a hearing conducted via telephone April 16, Chatigny ordered lawyers for the four girls “not to refer to the intervenors as ‘males’ but instead as ‘transgender females.’”

The judge said that the lawyers would not “surrender any legitimate interest or position if you refer to them as transgender females” and that the order was “consistent with science, common practice, and perhaps human decency.”

National Review posted a portion of the transcript of the hearing in which Chatigny pushed back on the girls’ lawyers’ use of language to make their case:

What I’m saying is you must refer to them as ‘transgender females’ rather than as ‘males.’ Again, that’s the more accurate terminology, and I think that it fully protects your client’s legitimate interests. Referring to these individuals as ‘transgender females’ is consistent with science, common practice, and perhaps human decency. To refer to them as ‘males,’ period, is not accurate, certainly not as accurate, and I think it’s needlessly provocative.

I don’t think that you surrender any legitimate interest or position if you refer to them as transgender females. That is what the case is about. This isn’t a case involving males who have decided that they want to run in girls’ events. This is a case about girls who say that transgender girls should not be allowed to run in girls’ events. So going forward, we will not refer to the proposed intervenors as ‘males,’ understood?

Soule, Smith, and Mitchell are the plaintiffs in the lawsuit that Alliance Defending Freedom filed in February over the transgender policy of the Connecticut Interscholastic Athletic Conference. Under the athletic group’s policy, students may compete in athletics on teams that align with their gender identity.

The four girls, all excellent athletes, began to lose events after two biological males who identify as girls began to compete against them, as CIAC policy allows. Alliance Defending Freedom and the girls it represents claim the policy contradicts Title IX’s intended purpose, which was to create equal opportunities for girls and women in education and sports.

The crux of the four girls’ case is that policies such as CIAC’s threaten any gains accomplished by Title IX because males and females have inherent biological differences that are especially prevalent in athletics: Men possess biological and physiological differences, especially following puberty, that give them advantages and allow them to be stronger, faster, and more fit than females competing in the same age range and sport.

The girls’ complaint in Soule v. Connecticut Association of Schools, filed with the U.S. District Court for the District of Connecticut, explains:

In track-and-field events that do not use equipment, the physiological differences between males and females after puberty are stark in the record books. No one doubts that top male and female high school athletes are equally committed to excelling in their sport, and train equally hard. Yet boys and men consistently run faster and jump higher and farther than girls and women.

Thus, the judge’s insistence that lawyers for the four girls refer to biological males as “transgender females” is important and worth fighting in court. The two other athletes in this case are not in fact “transgender females,” but males with physiological advantages that have become painfully obvious in the realm of sports.

Chatigny’s comment that his required language won’t hurt the four girls’ case is ignorant and shows the very bias one hopes would not exist in a court of law.

Forcing the girls’ lawyers to refer to the biological males who have been besting their clients as “transgender females” because doing otherwise might be seen as “bullying” or violating “human decency” presents a real concern: The girls are the ones being bullied as they watch Title IX twisted and used against them. The girls are the ones being treated indecently as a judge co-opts the very language that helps make their case.

Language in this instance is not a petty nit to pick. It is a vital instrument to communicate the truth of a legal case and to fight the erasure of the existence of girls and women, their rights, the ground they’ve gained in sports, and their very humanity.

It’s a shame to see a judge intervene in this lawsuit before lawyers even have been able to present their case and try to force the lawyers to use language that has no actual meaning but rather is a fabrication of a progressive ideology that has pervaded the legal system as well as society.

If such instances continue, there will be no recourse for talented, hardworking young women such as Selina Soule, Alanna Smith, Chelsea Mitchell, and Ashley Nicoletti when they are wronged.

This report has been corrected to reflect that the case now has four plaintiffs.