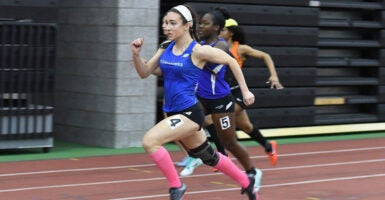 Under the guise of protecting all children, President Joe Biden created immediate controversy when he issued an executive order Jan. 20 directing federal agencies in effect to interpret existing anti-discrimination laws such that females no longer receive the umbrella of protection Title IX has long provided.

That means women’s sports (along with their locker rooms) and other activities would henceforth be open to participation by males who “identify” as females.

Biden said, “Every person should be treated with respect and dignity, and should be able to live without fear, no matter who they are or whom they love. Children should be able to learn without worrying about whether they will be denied access to the restroom, the locker room, or school sports.”

Does the president really mean “every person”? Does he really mean all children? He specifically mentions children of all races and disabilities, genders and sexual orientations, but as a woman and mother of two daughters, I really wonder whether Biden also cares about girls who just want to compete in athletics fairly and to the best of their abilities.

Critics ask why those girls matter when anti-discrimination laws are crafted with the marginalized minority in mind. Unfortunately, those very laws are being contorted to not only protect, say, someone with a disability from being discriminated against, but also to discriminate against healthy young girls who want to participate in sports and compete against only other females.

Four accomplished female athletes filed a lawsuit in federal court in Connecticut in February 2020, fighting for their right to do just that after they kept losing track meets to biological males who “identify” as females.

In an email, one of those athletes, Selina Soule, described how it felt when she heard about Biden’s executive order mandating a new interpretation of federal anti-discrimination laws.

It’s really heartbreaking and disappointing to watch the Biden administration push this gender identity policy, because I know how it affects girls. I’ve lived under this policy in Connecticut.

Girls like me lose championships, podium spots, advancement opportunities, and the recognition we deserve because we’re forced to compete against biological males in our races.

Women fought long and hard for athletic opportunities, and I want to preserve those opportunities for the next generation of female athletes.

Title IX specifically outlaws sex discrimination in education, including athletics, at schools that accept federal funds. It requires that schools treat male and female athletes equally. But there’s no way, when it was signed into law in 1972, that the law would have included biological males who “identify” as females.

It also would be difficult to argue that the Supreme Court’s Bostock v. Clayton County decision last June—which held it would be illegal for an employer to fire someone based on their sexual orientation or gender identity status—should be interpreted to include athletic competition.

In fact, the decision specifically said it shouldn’t be, a fact that Biden appears to be conveniently ignoring.

Under Title VII, too, we do not purport to address bathrooms, locker rooms, or anything else of the kind.

It is disturbingly anachronistic that, in an era where women’s rights are paramount and the feminist movement is vocal and effective, fair play for girls and women would even need to be argued, particularly within the parameters of anti-discrimination laws, inasmuch as Title IX was designed specifically to stop rampant sex discrimination in education and athletics.

In a statement, Soule’s attorney, Christiana Holcomb summed up the problem.

This isn’t equality, and it isn’t progress.

Females like Soule and girls like my daughters deserve to be able to play in a fair, equal environment, against other girls.

When males who “identify” as females compete against females, they place females at a competitive disadvantage. Male bodies present obvious physiological advantages: They have more muscle mass and less body fat than females. They have larger hearts and lungs, as well as greater bone density.

Even male hips are positioned differently, giving them the ability to run faster than women, on average. Biological and physiological differences between males and females are obvious and recognized, and it’s hardly a groundbreaking concept.

Yet to require biological males and females to compete against each other, under the guise of anti-discrimination laws, is to require that we as a society either deny these scientific facts or state that Title IX is now null and void.

We cannot accept both that men and women are exactly the same and that women are protected from sex discrimination.

Lawmakers have done the right thing in passing Title VII and Title IX. Anti-discrimination laws have likely helped millions of people who would otherwise face unfair actions at work, at school, and on a track field.

Those same laws should not be used against the very people they were designed to protect—women like Soule, who lost to a male because he “identifies” as a female and who watched as the law protected him over her, supposedly in the name of “anti-discrimination.”