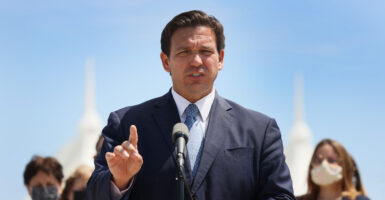 Florida Gov. Ron DeSantis has signed SB 2006, which gives him the authority to overrule cities that adopt restrictions deemed too harsh or unnecessary. Pictured: DeSantis speaks to the media April 8 about the cruise industry during a press conference at PortMiami. (Photo: Joe Raedle/Getty Images)

“I think that’s the evidence-based thing to do,” DeSantis said during a press conference Monday announcing the executive order. “I think folks that are saying they need to be policing people—at this point, if you’re saying that, then you’re really saying you don’t believe in the vaccines.”

DeSantis signed SB 2006, which says that any emergency orders can last no longer than six weeks. It gives him the authority to overrule cities that adopt restrictions deemed too harsh or unnecessary, and gives city and county commissions the power to overrule mayors.

It also gives the state Legislature the power to overrule any restrictions the governor enforces, which DeSantis touted as a check on any future Democratic governor who enforces rules the GOP Legislature opposes. While businesses can still mandate masks if they choose to, local governments cannot, under the law.

“I think the Legislature looked and said, ‘Well, OK, what if we were in a California situation?’” DeSantis said, touching on the Democratic state’s array of coronavirus restrictions in place. “What would the Legislature’s ability to be? And so they put safeguards for the people of Florida.”

Democrats, however, attacked the bill, alleging hypocrisy given Republicans’ seeming support of limited government and criticizing DeSantis’ leadership throughout the pandemic.

“The executive order he just signed to is just so hypocritical to the so-called values of the party of small government,” said Democratic state Rep. Anna Eskamani, according to the Orlando Sentinel. “It was local governments that led the way in protecting their people and putting into play standards that helped to stop the spread of COVID-19 … It really is so important that every government agency at every level work together to solve these problems, not continue to demonize [local] governments.”

“To be clear, cities like St. Pete, Tampa, Orlando, Miami, and Miami Beach saved Florida and the governor’s behind throughout this pandemic,” St. Petersburg Mayor Rick Kriseman said on Twitter. “Can you imagine if each city had been led by Ron DeSantis? How many lives would have been lost? What would our economy look like today?”