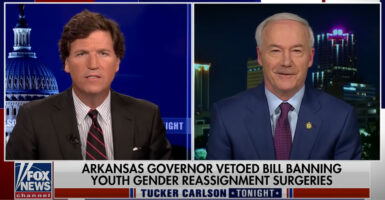 “Why are we preventing kids from drinking … or getting married, [or] having sex? They’re not old enough to have sex, but they’re old enough to be chemically castrated? How does that work exactly?” Fox News host Tucker Carlson asks Arkansas Gov. Asa Hutchinson. (Screenshot: Fox News)

Arkansas just did something historic: It’s become the first state in the nation to enact the Save Adolescents From Experimentation (SAFE) Act.

This much-maligned bill does three things: It protects minors from puberty blockers, cross-sex hormones, and/or masculinization or feminization surgery (all of which have permanent, life-long effects) until they are adults and can make adult decisions. It prohibits taxpayer or insurance mandates to pay for such procedures on minors. And it provides legal remedies for people who, as minors, have been permanently disfigured and/or sterilized by these procedures.

On Monday, Gov. Asa Hutchinson followed in the footsteps of South Dakota Gov. Kristi Noem and vetoed this carefully-crafted bill to protect minors from the ravages of the gender identity revolution.

In a rambling and logically disjointed statement, Hutchinson claimed that the SAFE Act would harm both Arkansas youth and Arkansas’ public image. Nothing could be further from the truth.

Fox News host Tucker Carlson invited the governor onto his show last night to defend his veto. The result was a train wreck, in which Carlson adeptly cited the research to turn the governor’s arguments on their head:

Far too often Republican politicians turn tail and run at the first sight of pushback, concerned with image and how they will be perceived by those who listen to the disinformation of the left.

Carlson demonstrated how to ignore the name-calling and argue from the data that the emperor isn’t wearing any clothes. It’s worth analyzing the arguments and presuppositions underlying the belief that little boys can become girls and little girls can become boys.

The governor claimed that limited government conservatives should not regulate medical decisions made by patients, parents, and doctors. This argument fails on two fronts:

1. The state has a compelling interest to protect children from harm. As the bill sponsors pointed out, we do not allow children to drink, smoke, drive cars, or even come home as newborns from the hospital without a car seat. None of these are considered government overreach by the vast majority of conservatives.

As Carlson asked, “Why are we preventing kids from drinking … or getting married, [or] having sex? They’re not old enough to have sex, but they’re old enough to be chemically castrated? How does that work exactly?”

One study of every person in Sweden who had completed gender transition surgery over the course of 30 years showed that their rate of completed suicides was 19 times higher than among the general population.

Other studies show that when allowed to develop naturally, the vast majority of children who experience gender incongruence (the feeling of being born in the “wrong body”) or gender dysphoria (discomfort with that feeling)—up to 85% of girls and up to 97% of boys—outgrow it by the time they become adults.

The governor also said he would have supported the bill if it was simply limited to banning castration. But as Carlson pointed out, “This is chemical castration … If you stop puberty and suppress the sex hormones, you’re chemically castrating someone.”

And he wasn’t wrong: Like many other “gender clinics” for children, the Arkansas Children’s Hospital website acknowledges on Page 2 of this “FAQ for Youth” that puberty blockers and cross-sex hormones are “irreversible.”

News reports have consistently stated that the SAFE Act denies transgender-identifying youth health care, and/or “erases” them. But as the name “Save Adolescents From Experimentation” indicates, the bill only prohibits experimenting on children. The bill sponsors said it best:

Gender incongruity and gender dysphoria are real, and serious. Families and children deserve compassion and care. Part of providing compassion and care is making sure children don’t harm themselves out of ignorance. The alternative is likely a future where thousands of adults look in the mirror and ask themselves what happened to all the adults.

Fortunately, Hutchinson’s veto has a happy ending: Thanks to the hard work of bill author state Rep. Robin Lundstrum and Senate sponsor state Sen. Alan Clark, who laid the groundwork in the weeks leading up to the public debate; and thanks to an all-out education effort by doctors, experts, and a very brave man who told the story of his experience transitioning from male to female for many years; and thanks to outreach from a range of national leaders (from Franklin Graham to the feminist Women’s Liberation Front), the Arkansas General Assembly promptly and resoundingly rejected the governor’s veto on Tuesday by a combined margin of 97-30.

These courageous legislators understood that by going first Arkansas would take some lumps, and they shouldered the responsibility admirably. Their courage has and should give heart to the 18 other states that have introduced legislation to address this issue.

If you (or your family and friends) live in Arkansas, click here to send a quick word of thanks to your officials for overriding the governor’s veto and protecting children.