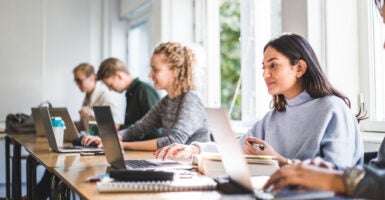 Officials at an Idaho middle school tried pressuring teachers to judge students by the color of their skin. But state lawmakers rejected this application of critical race theory, a deeply divisive philosophy driving many federal, state, and local policies today.

Idaho lawmakers made the case that school officials should not force students to believe “any sex, race, ethnicity, religion, color, national origin is inherently superior or inferior.” This is a biased belief that would violate any reasonable interpretation of federal civil rights laws if students acted on it.

Gov. Brad Little, a Republican, approved the proposal this week. With the new provisions, “no public institution,” including colleges and K-12 schools, “shall direct or otherwise compel students to personally affirm, adopt, or adhere” to the idea that “individuals should be adversely treated on the basis of their sex, race, religion, color, or national origin.”

Lawmakers were right to be concerned that some educators were distorting the idea of equality under the law. The Idaho Freedom Foundation, a research institute based in the state, obtained a flyer posted by Meridian Middle School officials that says it is not enough for teachers to “treat ALL students the same” (emphasis in the original). Instead, school officials say educators must recognize students’ multiple identities based on race, sex, religion, and other immutable traits.

Colorblindness, according to the school officials, is a “myth,” a rejection of this once-cherished idea from the civil rights movement. The flyer, available on the Idaho Freedom Foundation’s website, says colorblindness “perpetuates the idea that ‘white’ is the norm and everything else is not.”

It goes on to say that teachers are biased, whether they know it or not. That’s why you should “be aware of the areas you may experience privilege based on your gender, race, and sexual or gender identity” and “acknowledge your role as a social activist,” even if you did not realize you had chosen to be one.

The flyer is a striking example of the woke mob’s attempt to control how people think and act. It tries to manipulate guilt (“you may experience privilege”) and rejects the idea that we are all created equal, and that legal and cultural institutions should treat us accordingly (“reject the myth of colorblindness”).

The critical race theory dogma on display in this Idaho middle school is a philosophy that originated in Germany in the 1920s among a group of Marxist intellectuals. Originally termed “critical theory,” it teaches that we must consider society as being inhabited only by oppressors and the oppressed.

This worldview influenced professors in American law schools in the mid-20th century, inspiring a generation of lawyers, legislators, and legal scholars to apply the idea to an interpretation of the U.S. Constitution and legal system, arguing that American law is systemically oppressive. President Joe Biden even used this term in his speech before Congress earlier this week.

Still other intellectuals and academics in the U.S. expanded critical theory into what is now known as critical race theory, which believes that racial discrimination causes the constant state of oppression in society.

These ideas should offend the generations of Americans who have been taught that, as historian and former adviser to President John F. Kennedy Arthur Schlesinger said, “There are few better arguments for the Bill of Rights than the revolution in race relations over the last half century.”

What bizarre times we live in when lawmakers feel it necessary to remind teachers that students should not be taught to discriminate against other people based on immutable characteristics.

State lawmakers in Texas, Louisiana, New Hampshire, and Oklahoma, to name a few, are considering proposals similar to what Little approved in Idaho, and for good reason. For example, in Louisiana, the Orleans Parish school board adopted a resolution that says “our country’s racist history” is “still pervasive in today’s systems” and calls this nation “an unjust systemic racist America.”

How are students to believe that the American dream could ever be within their reach if school officials are telling them that this nation that they call home holds no such promise for them?

As lawmakers consider such proposals, policymakers should be careful to protect free speech rights. Teachers, especially college professors, commonly assign students critical reading material such as the “Communist Manifesto,” but lawmakers should be prepared to prohibit teachers from telling students to apply critical ideas.

Educators should not treat colleagues or students differently according to skin color or any other immutable characteristic, nor should teachers tell students to do the same.

“Wokeness is a problem and we all know it,” progressive campaign strategist James Carville told Vox this week in an interview. Shortly after Vox posted Carville’s comments, Sen. Tim Scott, R-S.C., responded to Biden’s address by saying, “Race is not a political weapon to settle every issue the way one side wants.”

It’s refreshing that we can still find such perspectives on both the right and left. Educators should be listening.