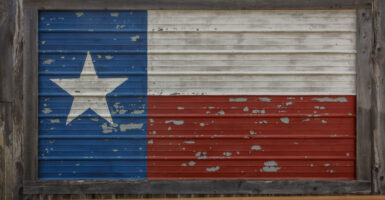 Critical race theory received a stunning rebuke at the polls in local Texas elections last week in a suburb of Dallas.

“On one side, progressives argued that curriculum and disciplinary changes were needed to make all children feel safe and welcome in Carroll, a mostly white but quickly diversifying school district,” NBC News reported. “On the other, conservatives in Southlake rejected the school diversity plan as an effort to indoctrinate students with a far-left ideology that, according to some, would institutionalize discrimination against white children and those with conservative Christian values.”

NBC News portrayed the Southlake elections on May 1 as “bitterly divided.” As many have noted, it may have been bitter, but it wasn’t divided.

About 70% of the vote went against a whole slate of candidates—from the mayor’s race to school board and City Council—who supported a “diversity plan” that pushed critical theory on students and faculty, and turnout for the election was high. That’s not a “divided” election; it’s a landslide.

One of the newly elected Texas school board members, Hannah Smith, went on the Fox News Channel’s “Fox & Friends” show on Tuesday to explain how she and others mobilized to fight the “false narrative” that their community was racist.

“When we started this battle last August, we paired up with like-minded parents around the country,” Smith told show co-host Steve Doocy. “I was on conference calls with parents from all over America who are fighting the same thing, so it’s important for people to know that they can band together and that they can make change.”

Smith noted that she and others worked to educate voters about what critical race theory is and how destructive it would be. Then, she and other members of the community made public records requests to ascertain how extensively those ideas were being propagated behind closed doors.

“We used [Freedom of Information Act requests] to really find out what our district was doing, and that empowered us with information that we could then use to fight against it,” she said.

What’s important about this rebuke of critical race theory and its advocates is not just that the doctrine was unpopular, but how parents and other opponents organized to stop it.

It raises the larger question: Is this just temporary good news or the beginning of a larger movement?

Critical race theory began being implemented in the Carroll Independent School District in earnest in 2018, when two high schoolers there used a racial slur on the social media platform TikTok. The students apologized, but this single incident began a crusade to create a racial reckoning in the community.

Conservative columnist Dana Loesch laid out in Newsweek how that plan appeared to do little to stop racism, and instead force-fed students an absurd program based on left-wing ideological goals. It required students to go through “diversity and inclusion training” to graduate, it committed to weeding out “microaggressions,” and it introduced critical race theory into the curriculum.

The plan included all the critical elements of the woke managerial revolution happening across the country.

“Diversity, equity, and inclusion” bureaucrats are empowered to root out heresy wherever they find it—and given that their livelihoods depend on it, they will surely find it whether it’s there or not.

It’s clear that many of America’s elite institutions see critical race theory and related ideas, such as “anti-racism,” as the cure for what ails us. America is portrayed as a country permanently attached to white supremacy from the beginning, whether it knows or acknowledges that or not.

So, what exactly is critical race theory?

My colleagues Mike Gonzalez and Jonathan Butcher explained what it is succinctly in an excellent paper for The Heritage Foundation, of which The Daily Signal is the news outlet.

Critical Race Theory (CRT) makes race the prism through which its proponents analyze all aspects of American life—and do so with a degree of persistence that has helped CRT impact all of American life.

CRT underpins identity politics, an ongoing effort to reimagine the United States as a nation riven by groups, each with specific claims on victimization.

In entertainment, as well as the education and workforce sectors of society, CRT is well-established, driving decision-making according to skin color—not individual value and talent.

This is not “sensitivity training,” as President Joe Biden sought to portray it in his run for office.

If anything, it is teaching Americans to hate each other, to see fellow citizens as the “other,” and to give license to discrimination in the name of racial justice.

That was, at its core, the thesis of The New York Times’ Pulitzer Prize-winning—but factually dubious—1619 Project.

It’s also a critical element of the “great awokening.”

Critical race theory has been promoted by corporate America and government agencies, on college campuses and in K-12 classrooms, and “Zoom rooms,” or whatever else they might call our cloistered COVID-19 spaces.

The intellectual point man has been Ibram X. Kendi, director of the Center for Antiracist Research at Boston University and author of “How to Be an Antiracist.” He’s the most prominent proponent of so-called anti-racism, which is largely just racial discrimination in the name of equity.

Kendi’s ideas, if they actually were to come to fruition, would end self-government in America and would create totalitarian authority invested in government officials every bit as absolute as they were in the former Soviet Union.

Kendi is taken very seriously by serious people, and he gets paid sizable sums of money to advise schools on how to adopt his toxic ideas.

Of course, the Biden administration is also eager to help the critical theory revolution along from the federal level.

That’s why the revolt in a Dallas suburb is so significant. Americans are becoming aware of this now pervasive ideology and are fighting back.

A single set of elections doesn’t quite signal a full turnaround on critical race theory and the neo-segregation that’s been on the rise in America, but it does show that it can be stopped at the local level if enough people are aware of it and organize.

The Biden administration may be doing its best to foist these ideas on American students for the next generation. But what the Texas elections show is that in their attempted takeover of American education, proponents of critical race theory will find at every school board meeting a group of angry parents armed with information about their radical agenda and willing to step up and fight back.

Given the immense power critical theory and intersectionality hold across America’s elite institutions, this set of Texas elections is a minor victory.

But it also provides a blueprint for how fed-up Americans can begin their own long march to take those institutions back from the woke.