The Resegregation of America 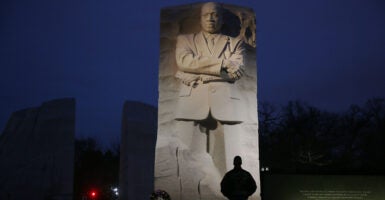 Individual merit and reasoned debate are out. “Lived experience” and the hierarchy of group grievance are now what matter most.

Even truth is considered meaningless. Narratives are everything.

The concept of fundamental human equality, derived from ideas at the heart of America’s founding and famously rearticulated by civil rights champion Martin Luther King Jr. in his “I Have a Dream” speech, is now being replaced by the enforced “equity” of the woke.

The end result, ironically, is the resegregation of America.

This new woke ideology, building on critical race theory, not only rejects the concept that people should be judged not by the color of their skin, but by the content of their character, it increasingly also embraces actual governmental race-based discrimination.

The evidence of this shift is everywhere.

To no one’s surprise, segregation is popular on modern college campuses, where these ideas originally bubbled up. Many schools, such as New York University, have been besieged with demands for racially segregated student housing, despite that being likely illegal.

Columbia University is now offering segregated graduation ceremonies for various racial and gender identity groups. Columbia, an Ivy League school, insists that these segregated ceremonies are all voluntary and in addition to the larger, integrated ceremony, but who’s to say that will continue?

By next year, would it be a surprise to see schools all over the country copy this practice?

Such ideas are coming to corporate America, too.

Proposition 16 in California, which would have officially brought back race-based affirmative action to the state, was rejected by voters. But it was widely supported by a gaggle of corporations, nonprofit groups, and well-connected billionaires.

Voters may balk at race-based discrimination, but woke corporations are seemingly happy to inject racial categories in their business models.

Open up an app for food-delivery services, such as Uber Eats, for instance, and you will likely see a section for “black-owned businesses.”

Are we now going to start choosing our dinner by racial group rather than by cuisine?

Such moves to create a more racialized society would be bad enough if they were only limited to college campuses and the practices of woke businesses, but they are disturbingly being incorporated into government policy, too.

Two Democratic senators recently said that they would no longer vote to confirm “non-diversity” nominees for federal government posts.

“I am a ‘no’ vote on the floor, on all non-diversity nominees,” said Sen. Tammy Duckworth, D-Ill., “You know, I will vote for racial minorities, and I will vote for LGBTQ, but anybody else, I’m not voting for.”

“We’re not just calling for [Asian Americans and Pacific Islanders],” Hirono said. “This is not about pitting one diversity group against them. So, I’m happy to vote for a Hispanic or black person and LGBTQ person and AAPI person.”

So, they’d vote to confirm any nominee—as long as he wasn’t straight and white.

Duckworth and Hirono eventually backed down from that stance, but the threat was telling.

Qualifications are irrelevant. Racial discrimination is good, as long as you discriminate against the right people.

The efforts to place identity before all other considerations do not just stop at those who can serve in government.

Several senators have floated legislation to create race-based programs that would direct funding toward specific racial groups. The Biden administration is backing the creation of a commission to investigate the possibility of reparations for slavery.

Cities are experimenting with race-based laws, too.

Libby Schaaf, the mayor of Oakland, California, announced that the city will be creating a universal basic income program in partnership with a nonprofit organization that will only give money to “black, indigenous, and other people of color,” according to KPIX-TV, the CBS affiliate in the Bay Area.

The program, which will give $500 a month to 600 low-income families for 18 months, was justified by supporters as based on statistical poverty disparities among racial groups.

The money for the program will come from Blue Meridian Partners, a philanthropic organization.

That opens up a few questions, beyond just its legality.

Will American citizens now need to take a genetic test to qualify for government services?

After all, we live in an age where gender is supposedly “fluid,” but race and culture, we’re told, are absolute.

Also, what exactly does a group disparity or statistic mean to anyone living in poverty who doesn’t qualify as a “person of color”?

As my colleague Mike Gonzalez wrote for City Journal, many of these proposals are likely unconstitutional and illegal violations of the 14th Amendment’s equal protection clause and Titles VI and VII of the 1964 Civil Rights Act.

That clearly won’t stop the woke from pushing them on Americans anyway.

“The woke Left understands that, as written and amended, the Constitution stands in the way of many of the things that it wants to do,” Gonzalez wrote. “This is why the Left has set about to cast the Constitution as illegitimate by, for example, purposely mischaracterizing the three-fifths compromise, pretending that the document perpetuated slavery, or calling it, as Kendi does, a ‘colorblind Constitution for a White-supremacist America.’”

That’s a reference to Ibram X. Kendi, a so-called anti-racist intellectual who has become massively popular in media and in higher-education circles.

Kendi aims to redefine racism as a collective, systemic act, rather than an individual one; denounces the concept of a colorblind society; and argues that racial discrimination can be good—as long as it’s pointed in the right direction.

Whether you’ve heard of Kendi or not, his ideas are now everywhere and are being delivered in a steady and growing dose to Americans and other people throughout the West.

America hasn’t always lived up to the promise of equality laid out in the Declaration of Independence. Slavery and segregation ran alongside our institutions and culture of liberty.

But the founding generation designed our system to bend toward justice and the truth. In time, we have built upon our cornerstone of freedom and corrected our flaws as a nation.

The intellectual vanguards of wokeness and critical race theory demand that the most fundamental aspects of self-government and preservation of individual rights be abandoned to serve the cause of destroying “systemic racism.”

Arguing to the contrary may be racist and, if Kendi gets his way, practically illegal—at least illegal for anyone in a position of power.

So, not only is America to be resegregated, but unlike in our past—when the American people were persuaded and freely chose to abandon and prohibit race-based policies—this time we will have no choice, and will simply be at the whim of woke apparatchiks.

Today, we may be debating whether our national origin is 1776 or 1619, but if our current course continues, our future will look more like 1917, the year of the communist Russian Revolution. For one group to rise, another must come down.

Race will simply replace class as the prime motivator of the revolution and eventual tyranny.

What we will end up with is misery, recriminations, and segregation now, tomorrow, and forever.