Socialism Is Rising and Now So Is Soviet Revisionism 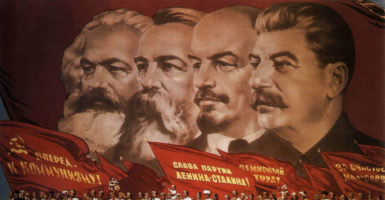 The collapse of the Berlin Wall 30 years ago was one of the most momentous days in history.

It represented the last gasp of a wicked regime that destroyed the lives of millions, and a new beginning for the many people held under the thumb of communism for generations.

It was a triumph of freedom over authoritarianism, a triumph for the United States and its allies in the long struggle to keep the flames of liberty alive in the face of ever-spreading darkness.

Not so fast, though, says The Daily Beast. On Veterans Day, the left-leaning outlet published an article claiming that “much of what many of us learned in school about the struggle between the U.S. and USSR was very, very wrong.”

This is the latest in a growing genre of Soviet and communist apologia. The New York Times, after all, dedicated a section of its website to a series of articles about the 1917 communist revolution in Russia, including a puff piece about Vladimir Lenin as an environmentalist and another touting women’s sex lives under socialism.

Yet there was no mention of the mass cover-up of Soviet crimes in the 1930s by Pulitzer Prize-winning New York Times reporter Walter Duranty.

The Daily Beast article was penned by Brian T. Brown, author of the new book “Someone Is Out to Get Us: A Not So Brief History of Cold War Paranoia and Madness.”

Brown tries to convince the reader that, despite what you may have heard, the Soviet Union wasn’t really that bad after all, and if it was bad, America is to blame.

An absurd and obnoxious Soviet apologetic might be worth dismissing out of hand. Yet, as a recent poll demonstrated, a growing number of young Americans say they prefer socialism or communism to capitalism.

The poll, conducted by the Victims of Communism Memorial Foundation, found that “15% of millennials think the world would be better off if the Soviet Union still existed.” A staggering 75% were unaware of the Soviet alliance with Nazi Germany at the start of World War II. And “57% of millennials (compared to 94% of the Silent Generation) believe the Declaration of Independence better guarantees freedom and equality over the Communist Manifesto.”

At one time, Americans would have almost universally mocked pro-Soviet propaganda as an embarrassing attempt to whitewash a murderous regime. Not so today.

It seems young Americans are now more receptive to communist notions and generally lack the “informed patriotism” that would allow them to see through the charade. Now, it must be actively combatted.

The United States, according to Brown, started the Cold War by dropping the atomic bombs on Japan and keeping the Soviets from joining in the invasion of that country.

It seems Brown is suggesting the U.S. was the aggressor because it put up roadblocks to Soviet conquest.

And how, exactly, would Japanese citizens have fared living under Soviet overlords as opposed to the United States?

Given the condition of East Germany at the time the Berlin Wall collapsed (and North Koreans as opposed to South Koreans today), this isn’t a difficult question to answer.

Brown then suggests that the Soviet Union wasn’t really all that bad, completely ignoring the countless murders and the imprisonment of millions of political prisoners in the Gulag Archipelago.

“[O]ur enemy, the so-called evil empire, was really a figment of our fevered imaginations,” he writes. “In fact, the people running the Kremlin were frightened frauds running a fundamentally dysfunctional state forever on the verge of collapse.”

This is simply false. As tattered, broken, and dispirited as the people under Soviet rule were at the end of its 70-year reign, the USSR nevertheless successfully created a vast and potent military state.

He also suggests the U.S. should have paid the Soviet Union more respect after World War II. Undoubtedly, the USSR suffered and sacrificed immensely to save itself from conquest by Nazi Germany. But Brown says we turned the Soviets into enemies instead of “thanking them” after the war.

This ignores the fact that the Soviets actually entered the war on the side of Adolf Hitler, enthusiastically carving up their Eastern European neighbors—only to fight back ferociously once betrayed.

Then, when the fighting stopped, the Soviet Union sponged the countries it “liberated” and put them behind an iron curtain of tyrannical government.

The real question is: What would a total Soviet victory at the close of World War II, without the presence of the United States, have even looked like?

The Soviet Union should not be thanked, but condemned for the fact that it stormed through Europe as a conqueror and not a liberator.

Brown concludes that “the Cold War rivalry was actually a mind-boggling waste of money and lives to wage an inherently lopsided contest with a preordained outcome.”

In reality, the asymmetry of the conflict was due to the fact that one system was based on an evil and broken ideology, and the other was set on a cornerstone of liberty that produced remarkable prosperity.

Moreover, the Soviet Union was enfeebled by the fact that the United States, leading a coalition of free people, spent a generation countering its power across the globe. Its collapse was far from inevitable. It was an achievement.

The Heart of the Matter

The revisionism of this poorly reasoned and factually thin piece is bad enough. Far more pernicious is the author’s larger intent: to downplay both the unfathomable evil of the Soviet Union and the indispensable role that America played in sending it into the dustbin of history.

As I wrote in my book “The War on History: The Conspiracy to Rewrite America’s Past,” there is a concerted attempt to undermine the “American century”—that is, the U.S. triumph on the international stage that led to the defeat of Nazi Germany and the Soviet Union, the twin tyrannies that threatened to plunge the world into a new dark age.

This is why we must continually reinforce the lessons of our history and that of the failed history of communism.

If we don’t reinforce these lessons, then the evil that our parents and grandparents defeated may soon reemerge for ourselves and our children.

Freedom, after all, really is never more than a generation away from extinction.