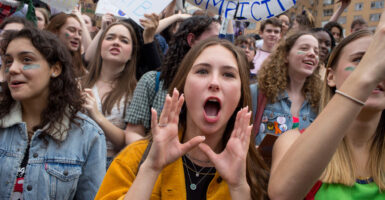 College campus safe spaces, speech codes, and woke witch hunts may be coming to a high school near you.

Charles Fain Lehman chronicled in The Washington Free Beacon how school districts and private schools around the country are adopting woke, “anti-racist” policies based on critical theory ideologies once ensconced in the ivory tower.

Schools are adding the Pulitzer Prize-winning but factually challenged 1619 Project, to their curriculum. The 1619 Project was aimed at reframing American history as being rooted in slavery rather than the ideas of liberty from 1776.

This is only the tip of the iceberg.

Virginia’s Fairfax County public school district paid Ibram X. Kendi, the leading proponent of “anti-racism,” which seems a lot like racism in the name of social justice, $22,000 to deliver an hourlong lecture to teachers and staff.

San Diego’s public schools have overhauled grading for fear of racist impact, and New York City wants to follow. The KIPP Schools, long a model for charter school excellence, have dumped their ‘Work hard. Be nice’ slogan, claiming that ‘working hard and being nice is not going to dismantle systemic racism.’

I’ve written about some of these cases, too.

Loudoun County, Virginia, not only adopted a program to enhance the “low level of racial consciousness and racial literacy” of its public school teachers and faculty, but it added punishments for teachers who questioned the policy in the public or private capacity.

The punishments were removed after the policy drew media attention and public outcry, but the woke agenda remained.

That critical race theory and various “woke” policies are proliferating at public and elite private schools around the country is disturbing enough. But Lehman highlighted a critical element as to how and why this is happening now, and on a vast scale.

These ideas have emerged alongside the surge of administrative bloat occurring in K-12 schools in the last several decades.

The first, of course, is the rising cost of public education, where a much larger share of the budget is devoted to administrators rather than teachers and students. This has often come at the expense of teachers’ salaries, which have generally not increased in line with upticks in school spending.

My colleague, Lindsey Burke, also director of education policy at The Heritage Foundation, and education researcher Benjamin Scafidi, an economics professor at Coles College of Business at Kennesaw State University, explained this process in 2016.

Since 1950, public schools have dramatically increased their staff compared to the number of students.

Burke and Scafidi used District of Columbia schools as an example.

“According to data that the District of Columbia Public Schools submitted to the U.S. Department of Education, the District’s public schools experienced a 3.1% decline in its student population between the 1993-94 and 2013-14 school years,” Burke and Scafidi wrote. “Despite this decline in students, D.C. Public Schools increased its staffing by 7.7% (all increases are in full-time equivalents).”

And where did those staff increases occur? The number of teachers declined overall, but the number administrators and all other staff grew by an incredible 19.3%.

Growth in administrative staff appears to be hitting elite private schools, too. And what are these administrative additions doing exactly? Clearly, many are foisting critical race theory and other ideologies on the student body and staff.

Lehman laid out the source of the second problem caused by the staffing surge:

Positions like ‘director of diversity’ emerged in the early 2000s, Exeter [diversity, equity, and inclusion] chief Stephanie Bramlett told the prestigious school’s alumni magazine. As far back as 2007, the journal Educational Leadership was emphasizing the need for administrators to confront ‘issues of social dominance and social justice.’

Portland Public Schools created its ‘office of equity’ in 2011. Holy Name High School in tiny Parma Heights, Ohio, added a director of diversity and inclusion in 2018. Justice High School already had diversity advisers on the payroll, and Harvard-Westlake’s new commitments add to a five-woman diversity team and a diversity conference held annually since 2018.

This revolution comes through the work of high-priced consultants and consulting firms, as in the case of Fairfax and other school districts. Meanwhile, the number of administrators continues to grow to meet the demand of the woke crusade.

“[I]f you look at these schools, their roster of [diversity, equity, and inclusion] people [has] only grown over the past five to 10 years,” Lehman said in an interview with The Daily Signal’s Virginia Allen.

That many of our colleges and universities are radical should be no surprise to anyone. After all, William F. Buckley wrote “God and Man at Yale” in 1951 to explain the left-wing drift of his school and many others. In the last half-century, the situation has become much worse.