Dissident Colombian Rebels Are Resuming Their Armed Struggle Against the Government. US Policymakers Should Be Alarmed. 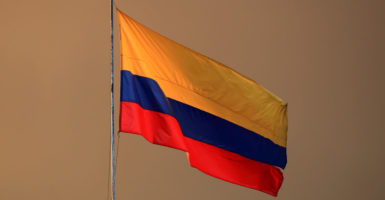 A faction of the demobilized terrorist group known as the Revolutionary Armed Forces of Colombia (FARC) announced it resumed the armed conflict against the Colombian government. (Photo: Anadolu Agency/Contributor/Getty Images

In the early hours of Aug. 29, Ivan Marquez and other leaders of the demobilized terrorist group known as the Revolutionary Armed Forces of Colombia (FARC) announced they resumed the armed conflict against the Colombian government.

Marquez and other dissident FARC combatants invited another terrorist group known as the National Liberation Army (ELN) and other rebel groups to join the new era of armed conflict. This violates commitments FARC made with the Colombian government during the 2016 peace accords.

Marquez was the FARC’s chief negotiator during the four-yearlong peace talks between the government and the FARC. Colombia’s President Ivan Duque believes he is hiding in Venezuela, where the illegitimate regime of Nicolas Maduro has long given the terrorists safe haven.

Marquez is also wanted by the U.S. government for allegedly running FARC’s international cocaine production and trafficking operations as well as the murder of hundreds of people.

To be clear, Marquez represents a minority faction of FARC dissidents. His announcement does not invalidate the peace accords, but could complicate the implementation for FARC combatants who genuinely want to demobilize and reintegrate into society.

The leadership of the FARC’s political party claims that over 90% of former combatants do not support a return to the armed conflict. This means that hundreds have not demobilized.

The key concern for policymakers is that the FARC dissident’s union with the ELN and other armed rebel groups could be the start of a guerilla war in Colombia.

In January, the ELN bombed a police academy in the capital city of Bogota, killing 21 people. It was the worst attack in Bogota in 16 years. The ELN did so to force the government back to the negotiating table after peace talks fell apart.

These strong-arm tactics of the rebels are not new and were used by the FARC during its peace talks with the government.

The FARC leader claims his recent call to arms is due to the Colombian government not providing the guarantees they were promised by the previous administration and acts of violence against demobilized FARC combatants.

These criticisms do not hold water.

The timing of these events and the potential for a guerilla war in Colombia should be alarming to the international community, mainly countries in Latin America, and U.S. policymakers. It should serve as a lesson about flaws within the peace agreement and their lasting consequences. One of which was in the realm of counternarcotics operations.

Then-President Juan Manuel Santos ended aerial eradication of coca crops at the behest of FARC in 2015, the most effective technique to eliminate coca plants.

FARC funded much of its efforts with the drug trade and a 2012 estimate placed earnings between $2.4 and $3.5 billion.

In 2017, Colombia produced the highest recorded number of coca crops with 209,000 hectares compared to 112,000 in 2014. More alarming is the cocaine production potential of these crops.

Without aerial spraying, the crops are hardier and able to replicate at a quicker rate. In 2014, production potential was at 324 metric tons in comparison to a drastic increase to 887 metric tons in 2018.

Dissident FARC and current ELN criminal activity is not confined to the Colombian borders either.

These groups have a heavy presence in Venezuelan territory as both countries share a 1,378-mile-long border. This new alliance raises concerns that its conflict with Colombia could worsen tensions between Colombia and Venezuela due to the Venezuelans’ decades-long support of the FARC and other regional criminal actors.

The challenge facing Colombia is how to continue implementing the peace process and prevent future FARC defections.

Part of the strategy must now involve addressing the dissident FARC members and their ELN allies.

As Colombia’s closest ally, the U.S. must support these efforts. American policymakers often think Colombia’s transformation means it has the capabilities to deal with internal threats. That is a dangerous assumption. They must not take peace in Colombia for granted.