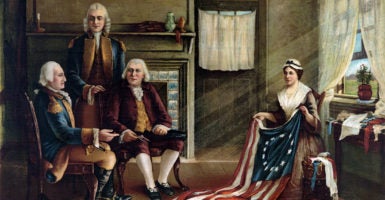 Gov. Doug Ducey revealed on Tuesday that the state of Arizona will be withdrawing all of the financial incentives provided to Nike following the company’s decision to pull an American flag-themed sneaker it deemed offensive.

“Today was supposed to be a good day in Arizona, with the announcement of a major [Nike] investment in Goodyear, [Arizona],” Ducey said. “And then this news broke yesterday afternoon.”

And then this news broke yesterday afternoon. 2/https://t.co/NmM8OPGR0G

“Words cannot express my disappointment at this terrible decision. I am embarrassed for Nike,” he continued. “Nike is an iconic American brand and American company. This country, our system of government and free enterprise have allowed them to prosper and flourish.”

Air Manufacturing Innovation, the Nike subsidiary that makes Nike Air sneakers, announced plans to open a multimillion-dollar facility in the Grand Canyon state only hours before news broke that Nike was recalling Air Max 1 USA sneakers because a Revolutionary War-era version of the flag was stitched on the heel.

The already produced shoe line was pulled after former NFL quarterback Colin Kaepernick complained that the Betsey Ross flag was a symbol of the slave era and considered offensive, reported The Wall Street Journal.

Kaepernick, a Nike endorser, gained notoriety by kneeling during the national anthem to protest systematic racism in America.

“Instead of celebrating American history the week of our nation’s independence, Nike has apparently decided that Betsy Ross is unworthy, and has bowed to the current onslaught of political correctness and historical revisionism,” Ducey said. “It is a shameful retreat for the company. American businesses should be proud of our country’s history, not abandoning it.”

“Nike has made its decision, and now we’re making ours. I’ve ordered the Arizona Commerce Authority to withdraw all financial incentive dollars under their discretion that the State was providing for the company to locate here,” he continued. “Arizona’s economy is doing just fine without Nike. We don’t need to suck up to companies that consciously denigrate our nation’s history.”

The famed shoemaker planned to invest more than $184 million into the first phase of the Goodyear-based facility, according to Arizona’s ABC15. Operations were scheduled to be up and running by 2020 and create at least 505 new full-time manufacturing jobs.

“It shouldn’t take a controversy over a shoe for our kids to know who Betsy Ross is. A founding mother. Her story should be taught in all American schools,” Ducey added. “In the meantime, it’s worth Googling her.”