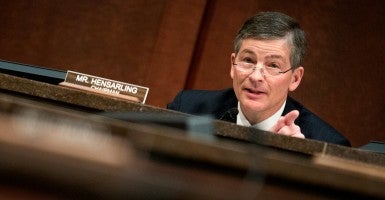 The 2010 Dodd-Frank Wall Street Reform and Consumer Protection Act is among the most inappropriately named laws ever enacted in the U.S. It neither reformed Wall Street nor protected consumers, and it imposed massive new regulations on banks far away from Wall Street.

House Financial Services Committee Chairman Jeb Hensarling, R-Texas, has long recognized how harmful Dodd-Frank is to consumers, and he has vowed his committee will not rest until “we toss Dodd-Frank onto the trash heap of history.”

Recently, Hensarling took a giant step in that direction. At the Economic Club of New York, Hensarling outlined the Financial CHOICE Act, a bill that would repeal some of the most damaging Dodd-Frank provisions. CHOICE stands for Creating Hope and Opportunity for Investors, Consumers, and Entrepreneurs.

I fear Dodd-Frank’s ultimate purpose is to eventually render effective control of our capital markets to the state; to turn large money-center banks into functional utilities, so that the state can allocate credit within our economy to politically favored classes. In other words, to take over the commanding heights of our economy. This must not be allowed to stand.

It’s pretty hard to argue with this, least of all because Dodd-Frank created a new legal entity know as a financial market utility.

In addition to repealing some of the worst Dodd-Frank sections, such as those that codified the too big to fail doctrine, the new bill includes a commonsense regulatory off-ramp for banks. The off-ramp rewards banks that meet a higher capital ratio—a flat, nonrisk-weighted measure—of 10 percent by exempting them from onerous regulations.

This optional off-ramp restores market discipline and lets banks compete on a level playing field. It’s an important philosophical statement too because it allows banks that choose to absorb their own risks to operate more like nonbank companies.

Separately, here are a few of the bill’s key provisions:

1. Repeals most of Title I and all of Title VIII of Dodd-Frank. Title I created the Financial Stability Oversight Council, a council that consists of the federal regulators that entirely missed the last financial crisis. The council designates firms that regulators view as systemically important, thus enshrining too big to fail.

Aside from these designations, the Financial Stability Oversight Council is wholly incompatible with free enterprise. All the same criticisms apply to Title VIII, essentially a special version of Title I for firms newly designated as financial market utilities. While it would be better to fully repeal Title I, the Financial CHOICE Act repeals the council’s ability to designate systemically important firms and also eliminates the Office of Financial Research.

Title II also authorizes the Federal Deposit Insurance Corporation to hold taxpayers responsible for the most worthless assets on a company’s books. The time-tested bankruptcy system, with its legal protections and judicial supervision, is a far better system. The Financial CHOICE Act would also enact bankruptcy for large financial institutions.

3. Reforms the Consumer Financial Protection Bureau. Title X of Dodd-Frank gave us the Consumer Financial Protection Bureau, an agency that wields unparalleled rulemaking, supervisory, and enforcement powers. The bureau operates very differently from most financial regulators, and it has virtually no accountability to Congress or the executive branch.

Though it would be far better to repeal Title X and eliminate the bureau (other federal agencies were already charged with consumer protection in financial markets), the reform bill changes the bureau’s structure into that of a bipartisan commission, much like the Securities and Exchange Commission.

Though it would be better to completely eliminate the Fed’s emergency lending authority—it’s unnecessary to conduct monetary policy—the committee’s new bill amends the authority so that it will be more difficult for the Fed to conduct bailout-style loans to insolvent firms.

5. Eliminates the Volcker rule. This rule—in Title VI of Dodd-Frank—is supposed to protect taxpayers by prohibiting banks from engaging in what’s known as proprietary trading—that is, making risky investments solely for their own profit. Although it sounds logical to stop banks from taking “risky bets” with federally insured deposits, this idea ignores the basic fact that banks make risky investments with federally insured deposits every time they make a loan.

There’s really no reason to think that the Volcker Rule would have prevented—or even softened—the 2008 crisis or any previous financial crisis. Yet, regulators spent years developing nearly 1,000 pages of regulatory language to implement the rule. Good riddance.

The act would provide much needed accountability because major rules could no longer be adopted until and unless Congress adopted a “resolution of approval.” Presently, Congress gets to take credit for enacting popular but vague legislation, but then can plausibly deny responsibility for the costly regulations that result. The Executive in Need of Scrutiny Act would end this shell game.

7. Strengthens penalties for fraud. The Financial CHOICE Act would double the cap for the most serious securities law violations and also allow for triple fines when penalties are tied to illegal profits. Furthermore, the bill would increase the maximum criminal fines for both individuals and firms that engage in insider trading.

The new bill includes many other policy improvements, such as moving the Fed’s regulatory authority into the appropriations process, providing an ability-to-repay safe harbor for mortgages banks hold rather than securitize, and getting rid of the Chevron doctrine that requires the judiciary to give deference to regulatory agencies’ interpretation of the law.

The Financial CHOICE Act would also incorporate nearly four dozen other bills that Financial Services (or the full House) previously passed, all dealing with capital formation and/or regulatory relief for community financial institutions.

The Financial CHOICE Act doesn’t repeal all of the Dodd-Frank Act, but it represents a major step toward getting rid of it. Enacting a bill such as this would provide much needed regulatory relief that would help revitalize our economy.

For all the talk of protecting taxpayers and ending too big to fail, the Dodd-Frank Act did nothing more than double down on the existing regulatory framework that contributed to the crisis.

Since 2010, many politicians won seats in Congress after promising to end bailouts. We don’t need a massive regulatory bill to stop bailouts, we need elected members of Congress to exercise the courage to act as they promised. As Hensarling put it, we need “economic growth for all and bank bailouts for none.”

We also need Congress to refocus financial market regulation based on the principle of limited government. The proper role of government in financial markets is to deter and punish fraud, and foster reasonable disclosure of information that is material to investors.

Policies that overly involve the government in financial decisions and try to ensure the safety of financial markets are not really reforms, they’re more of what’s caused previous crises.

This new bill is proof that Hensarling and his Financial Services Committee colleagues understand what financial regulatory reform really looks like.