The Greatest Libel Since the Blood Libel 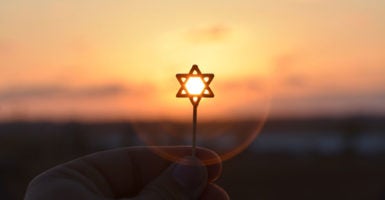 The Blood Libel in medieval Europe was a prominent manifestation of anti-Semitism. (Photo: iStock Photos)

The most infamous libel in history is the one known as the blood libel.

This was the medieval lie leveled at Jews in some European countries that accused the Jews of killing Christian children to use their blood to make Passover matzo.

As the author of a book on the history of anti-Semitism (“Why the Jews? The Reason for Antisemitism”), having taught Jewish history at the college level, and as a committed Jew who has devoted great efforts to combating anti-Semitism, I do not easily compare anything to the blood libel.

But perhaps the second-greatest libel—and certainly the most widespread—is that America is a racist country that oppresses its minorities—and women. We can call it the American Libel.

Now, I hasten to add that no one is being tortured to death as a result of this libel, as Jews were because of the blood libel, and, of course, no communities are being slaughtered as Jews were.

But the American Libel should be regarded as one of the great libels of history.

That America today oppresses minorities and women is as far from the truth as was Jews using Christian blood for matzo. Indeed, no country in the world is so accepting of minorities as fellow citizens as America.

A third-generation German of Turkish descent is still regarded by most Germans as Turkish. But a first-generation Turkish—or Nigerian or Chinese—immigrant to America is regarded simply as one more American.

For more than a year, members of our team have protested the oppression and social injustices still present in our society.

Or a column by a Muslim writer in the HuffPost:

The oppression they [blacks] face is much greater than the bigotry I [a Muslim] face. It is a racism and oppression rooted in our culture.

Last year, ESPN’s Paul Finebaum said on-air, “This country has issues, but this country is not oppressing black people.”

After being widely denounced, two days later Finebaum felt it necessary to issue this abject apology:

I could spend the rest of my life trying to talk my way out of it, but I can’t. I blew it. I simply did not have a good grasp of the situation. I know better. I’ve lived in this country. I see what is going on all across the country from North to South, East to West and I have no excuse. … All I can say is that I made a terrible mistake. In trying to express a feeling that I probably—not probably—I had no right to express.

The headline of a column by Washington Post columnist Courtland Milloy: “In America, racial oppression is not ancient history.”

A headline of another Washington Post column: “How blacks, oppressed by white supremacy, can find a path to liberation.”

Such examples are endless. America oppresses blacks, Latinos, women, gays, and everyone else who is not a white, male, heterosexual Christian.

It is a great lie. But it is the dominant narrative of the society. And, as lies are the root of evil, this lie must lead to something awful.

It has already begun to:

First, vast numbers of nonwhites are being raised to believe that America hates them. This should be considered a form of child abuse.

Second, the charge that America is a land of oppression has utterly cheapened the word “oppression.” The truly oppressed of the world will have to find a new word to express their condition.

If blacks and women in America are oppressed, what word shall we use to describe the condition of Christians in Iraq or Egypt? Of gays in Iran? Of women in much of the Muslim world? Of the Untouchables in India? Kurds in Turkey?

But worse is yet to come.

The Jews survived the blood libel. But America may not survive the American Libel. While the first libel led to the death of many Jews, the present libel may lead to the death of a civilization.

Indeed, the least oppressive ever created.