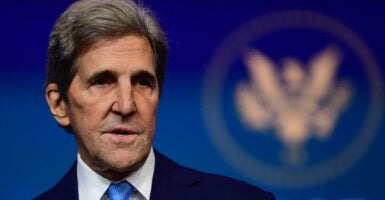 The European Union wants the U.S. to rejoin the Paris climate agreement, which was abandoned by President Donald Trump. It’s likely to get its wish from a prospective Joe Biden presidency, as Biden tapped former Secretary of State John Kerry, seen here Nov. 24, as his special presidential envoy for climate. (Photo: Mark Makela/Getty Images)

The European Union Commission, the executive arm of the EU, earlier this month published what it called a “new EU-US agenda for global change.”

The agenda is the EU’s attempt to reset relations with the U.S. after the Trump administration.

That a similar agenda was not offered to President Donald Trump four years ago underscores the fact that most of Brussels’ elite saw its duty as obstructing the Trump administration, rather than undertaking a good-faith effort to find areas to work with it.

The EU’s agenda for “global change” reads much like a Christmas gift list, a multitude of asks on EU priority issues where it’s keen for U.S. involvement, yet short on reciprocal offers to meet the U.S. halfway on issues where American strategic interests desire greater European cooperation.

What the strategic agenda lacks in the spirit of giving, it more than makes up for in its splashy supplications.

On pandemic response, the EU calls for the U.S. to join in the World Health Organization/EU’s Access to COVID-19 Tools (ACT) Accelerator; specifically, its COVAX Facility. What the commission undoubtedly desires most is U.S. financing to fill the ACT’s $28 billion funding gap.

The EU’s agenda also calls for the U.S. to rejoin the WHO and talks of putting together a joint reform package. The absence of any specifics about WHO reform calls into question just how serious Brussels is about rooting out the corrupting influence of China in the WHO and myriad other international organizations.

There are specific reforms the U.S. and Europe could and should push for together in order to restore the WHO’s shattered credibility, but returning to multilateral organizations for the sake of comity absent reform is a recipe for continued failure.

The bulk of the commission’s wish list focuses on climate, replete with calls for the U.S. to sign up for a host of global agreements that would impinge upon U.S. sovereignty while doing little to mitigate the issue at hand.

Calls for the U.S. to ratify the United Nations Convention on Biological Diversity and the Arms Trade Treaty and to join an EU proposal for a U.N. Global Plastics Treaty are dead on arrival in Washington due to the two-thirds Senate vote needed for ratification.

However, the U.S. is sure to rejoin the Paris climate agreement, the international agreement nearest and dearest to the hearts of many in Europe.

Never mind that the U.S. is cutting emissions without being party to the agreement. The agenda for global change is a victory lap on the agreement’s revival, and it calls for the U.S. to join the EU to pledge to become carbon neutral by 2050.

The EU indicates that this united EU-U.S. pledge will lead the world to follow in its footsteps, despite a lack of enforcement mechanism in the agreement.

Characteristically, the agenda for global change fails to discuss how to curb emissions from the world’s biggest polluter, China. Under the Paris Agreement, China and India can continue pumping out carbon dioxide while American taxpayers will once again be on the hook for the agreement’s significant costs.

To believe Beijing and New Delhi will change their tack because of some grand EU-U.S. shared commitment to carbon neutrality strains credulity.

The EU’s wish list includes a host of other bad ideas, from a digital tax to the U.S. rejoining the Iran nuclear agreement, which it states is “a key pillar of the global nonproliferation architecture” and that “we need to work together to further its achievements.”

The Biden team states it plans to rejoin the agreement once Iran returns to compliance. That Iran was never in compliance seems a minor nuisance.

While Biden has indicated some interest in renegotiating some of the holes in the Swiss cheese agreement, it’s clear that Europe views the agreement as a closed book, barely hiding its eagerness to sign lucrative business deals with Tehran, security consequences be damned.

Additionally, the agenda almost farcically invites the U.S. to join the EU in pressing for secure 5G, as though the subject hadn’t been on the U.S. agenda.

In reality, U.S. leadership under Trump forced Europe to rethink the threats posed by Chinese tech, leading to important decisions some nations, such as France and the U.K., have taken to move away from Chinese providers in their 5G networks.

On 5G, the EU has been lacking. The commission’s so-called 5G “toolbox” released in January was woefully inadequate. It’s the U.S., not the EU, that has led on the issue of 5G, and sadly, if Germany’s recent draft bill is any indication, America is still fighting an uphill battle.

The EU is enthusiastic about a Biden proposal for a summit for democracy, but I suspect Brussels is more interested in the U.S. joining admonitions against purportedly recalcitrant Eastern European nations, rather than targeting the world’s genuinely undemocratic nations.

Perhaps the worst idea on the EU’s list are calls for an EU-U.S. Security and Defense Dialogue and a greater EU role in defense.

Nothing would strain the transatlantic bond more and undermine NATO faster than EU defense integration. Decades of similar aspirations and proposals from Brussels have led to little or no additional defense capability.

The peril there is that a Biden administration would be unable to resist this siren song, piloting transatlantic security toward the rocks.

Perhaps most strikingly for the EU’s proposed agenda is what it doesn’t contain.

A document of more than 4,500 words, it only includes the word “China” six times, calling it “a negotiating partner for cooperation, an economic competitor, and a systemic rival.” How the commission intends to untangle that obvious oxymoron is left unaddressed.

Russia is mentioned only once, bracketed with fuzzy language about upholding international law. That the two greatest challenges for both the U.S. and Europe receive next-to-no mention showcases that the EU is out of ideas to address the largest challenges the transatlantic community faces—and perhaps worse, has little interest in doing so.

The EU-U.S. agenda for global change is a missed opportunity to focus on concrete areas where the U.S. and EU have mutual interests; for instance, the Three Seas Initiative, strengthening investment-screening mechanisms in Europe, or building on recent successes in the Balkans (which receive only token mention).

Rather, it reads like an extensive Christmas list filled with ill-conceived multilateral agreements that do little to help the transatlantic community address the biggest problems of the day, while subsuming U.S. sovereignty under various flavors of global governance.

It deserves a lump of coal. Maybe China can supply it.