John Kerry Would Return as Climate Czar in Biden Administration 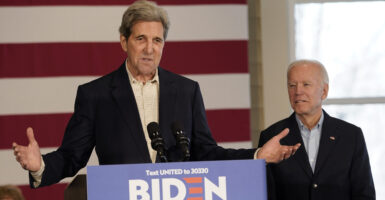 John Kerry, a former secretary of state in the Obama administration and the 2004 Democratic presidential nominee, will return to the federal government to oversee climate policy, former Vice President Joe Biden announced Monday.

Biden, who several major news outlets have projected as president-elect, announced his national security team on Monday, including his would-be nominees for secretary of state, Antony Blinken; and homeland security secretary, Alejandro Mayorkas. Most of the key players are Obama administration alumni.

In a tweet, the Biden transition team said: “Under the Biden-Harris administration, American national security and foreign policy will be led by experienced professionals ready to restore principled leadership on the world stage and dignified leadership at home.”

The announcement comes as President Donald Trump’s campaign is litigating election results in several states where the outcome was close.

Assuming current results hold, Kerry would be joining the Biden administration as special presidential envoy for climate. While running the State Department during President Barack Obama’s second term, Kerry played a key role in negotiating the Paris climate accord. Among Biden’s campaign pledges was one involving promoting a green economy.

“The work we began with the Paris Agreement is far from done,” Kerry said in a tweet Monday. “I’m returning to government to get America back on track to address the biggest challenge of this generation and those that will follow. The climate crisis demands nothing less than all hands on deck.”

After returning to private life, Kerry co-founded the climate group World War Zero to promote public policies on the environment.

The Trump administration withdrew the United States from the Paris Agreement, but during the presidential campaign, Biden vowed to rejoin it.

Before serving in the Obama administration, Kerry was a U.S. senator from Massachusetts from 1985 through early 2013. While serving in the Senate, he won the 2004 Democratic presidential nomination, but lost to President George W. Bush in the general election.

Biden also announced he would nominate Avril Haines to be the director of the Office of National Intelligence and Linda Thomas-Greenfield to be U.S. ambassador to the United Nations.