Democrats Want to Rejoin the Paris Accord. Let’s Recall Why It Was Such a Bad Deal. 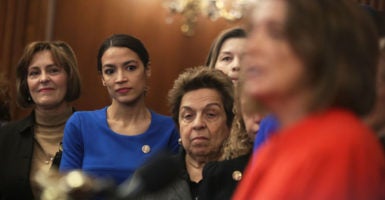 When the Obama administration negotiated the Paris climate agreement, conservatives argued that it should move through the proper treaty process and be sent to the Senate, where elected senators could weigh in and potentially reject the deal.

President Barack Obama didn’t do that. Instead, he unilaterally signed the deal, making it all the more easy for a future president to un-sign it.

Last week, the House Foreign Affairs Committee advanced the Climate Action Now Act, a bill that would block the Trump administration from withdrawing from the Paris accord and enforce the commitments made under the Obama administration. Those commitments include reducing U.S. greenhouse gas emissions in 2025 by 26-28% compared to 2005 levels.

Trump was right to announce his intent to withdraw from Paris. While the climate is indeed changing and human activity is playing a role, the chances of looming climate catastrophe are simply unrealistic and not grounded in reality.

Those who are clamoring for action on climate change are the ones who should actually be most upset with what a sham the Paris agreement is. It’s been celebrated as a breakthrough achievement of the world’s developed and developing countries coming together, but it is anything but that.

With no enforcement mechanisms in place and no repercussions for failing to meet emissions reduction targets, countries are essentially free to do whatever they want, meaning they will continue on their business-as-usual trajectory without making any changes. China, for instance, can peak its emissions in 2030 even though projections have their peak emissions falling before that year.