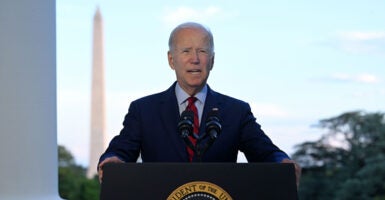 The Biden administration has yet to scrap a key Trump-era border policy; the Supreme Court said it could do so and the reason could be because of the president’s political future, experts told The Daily Caller News Foundation.

After months of attempts to stop the continuation of the “Remain in Mexico” policy, which is used to expel certain migrants to Mexico as they await immigration proceedings, the Supreme Court granted the Biden administration the authority to do so in a June decision.

The Biden administration has yet to end the program and the White House and the Department of Homeland Security are silent on next steps as they didn’t respond to The Daily Caller News Foundation’s requests for comment.

One reason President Joe Biden hasn’t delivered on his word is because his political future could be at risk by the potential for more chaos at the border, Allen Orr, American Immigration Lawyers Association immediate past president, told The Daily Caller News Foundation.

“I think the Biden administration is being overly cautious with regards to ending the program as they don’t want to have anything to happen at the southern border that would seem that things were out of control. Politically, that would not be a great thing with the midterms coming up and his approval ratings being so low,” Orr said.

“I also think that he has been working with private and public partnerships to sort of address the immigration issue as we’ve seen an agreement reached with Mexico just a few weeks ago, where they were going to put millions of dollars into helping ensure an orderly border between the United States and Mexico,” he added.

Rep. Henry Cuellar, D-Texas, whose district is along the southern border, agreed that the lack of change is political, he told The Daily Caller News Foundation.

“I think they, especially the career people, not the political people, know that there are some things that will slow people down and [the Migrant Protection Protocols] is one of them. They probably don’t want to say that publicly,” Cuellar said.

“They unfortunately have to follow the instructions that come from the top, and I would say even [Homeland Security Secretary Alejandro] Mayorkas understands this and understands that we got to slow down the number of people, but you know, everybody gets instructions from higher up places at the White House. So, I think they probably are trying to slow this as much as possible,” he added.

A migrant I met in Yuma last month was sent back to Mexico, under the Trump-era ‘Remain in Mexico’ policy. He sent me these pictures of the camp in Mexico where he’s awaiting his court hearing, telling me the air conditioning barely works, the food is expired, and it’s filthy. pic.twitter.com/XO6dKvz41C

“MPP is already dead—the court-ordered relaunch was all for show. Only a few thousand migrants have been enrolled in the program, with most being either released into the country or expelled under Title 42. Border numbers are still through the roof,” Kovach said.

U.S. Customs and Border Protection expelled 2,097 illegal aliens in June, 2,129 in May, and 1,725 in April. During the aforementioned months, migrant encounters at the southern border exceeded 200,000, respectively, according to CBP statistics.

“Nothing will change one way or another once the MPP facade officially ends,” Kovach said.