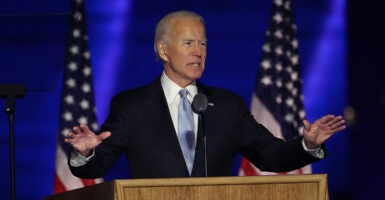 Even if he scores a narrow official victory in the race for president, Joe Biden likely will push his campaign agenda. Pictured: Biden addresses the nation Saturday night from Chase Center in Wilmington, Delaware. (Photo: Tasos Katopodis/Getty Images)

Amnesty for illegal immigrants, taxpayer funding for abortions, and a transition from using oil for energy were key to former Vice President Joe Biden’s campaign for the White House.

Biden laid out many policy proposals during his campaign to unseat President Donald Trump, which major media outlets called in the Democratic challenger’s favor Saturday even as ballot counting and litigation continued.

Trump has not conceded the fiercely fought contest, and his campaign team said it intends to pursue legal challenges Monday across several closely contested states.

“Now that the campaign is over, what is the people’s will? What is our mandate?” Biden said in what was billed as a victory speech Saturday night in Wilmington, Delaware, adding:

Implementing is always tougher than promising, and Biden appears not to have brought along a Democratic majority in the Senate on his way to the White House, although the chamber’s final makeup awaits two run-off elections in Georgia on Jan. 5. Democrats will remain in control of the House, although by a narrower margin as Republicans made gains.

Even with a narrow win, though, Biden likely will push his campaign agenda. Here’s a look at some of those policies.

Early in his campaign, during the summer of 2019, Biden vowed to do away with the Hyde Amendment, a law that prevents Medicaid funds from being used to pay for most abortions. It’s a law Biden previously supported.

The law is named for the late Rep. Henry Hyde, R-Ill.

Past presidents and members of Congress, regardless of their stance on abortion, have supported the Hyde Amendment.

Only in 2016 did the Democratic National Convention platform call for an end to the Hyde Amendment.

Biden has a broad immigration agenda that is quite different from Trump’s.

Potentially the biggest reversal from the Trump administration is ending the national emergency that Trump declared in early 2019 to use Defense Department dollars to pay for construction of a wall on the U.S.-Mexico border.

Biden also said he wants to secure the Obama-era Deferred Action for Childhood Arrivals policy, which protects illegal immigrants who first entered the United States as minors from being deported.

Biden also said he would rescind the Trump administration’s “extreme vetting” of travelers from several majority-Muslim countries in the Middle East seen as terrorism risks.

Biden’s campaign also called for a “road map to citizenship for the nearly 11 million people” in the United States illegally.

During the campaign, Biden said he wants to set up a Pandemic Testing Board modeled after the War Production Board that President Franklin Roosevelt established during World War II.

The campaign plan says the board would run a national effort to provide diagnostic and antibody tests for COVID-19, the disease caused by the new coronavirus; coordinate distribution to every state; identify testing sites and provide sufficient training personnel; ensure adequate lab capacity and swift reporting of results; and provide clear guidance on who needs a test.

In his speech Saturday night, Biden said he would name “a group of leading scientists and experts” on Monday as transition advisers to help turn the campaign’s COVID-19 plan into “an action blueprint” to implement Jan. 20, which is Inauguration Day.

“We cannot repair the economy, restore our vitality, or relish life’s most precious moments—hugging a grandchild, birthdays, weddings, graduations, all the moments that matter most to us—until we get this virus under control,” Biden said.

“I will spare no effort—or commitment—to turn this pandemic around,” he said.

The Biden campaign said the Pandemic Testing Board should have members from the public and private sectors as well as state and local leaders.

Biden did not endorse the “Green New Deal” supported by the far-left wing of the Democratic Party, but has backed elements of alternative energy and talked about phasing out the use of oil and gas.

He also has gone back and forth about whether he would eliminate the process of hydraulic fracturing, or fracking, to find oil and natural gas.

Biden’s campaign called for a “modern infrastructure and an equitable, clean energy future” that would focus on using green energy with “sustainable infrastructure.”

His campaign said this was necessary to meet the “climate crisis” and build a clean energy economy, as well as to address “environmental injustice” and create what the Democratic nominee called millions of good-paying union jobs.

5. ‘Bidencare’ and a Public Option

In the second debate with Trump, Biden referred to his health care plan as “Bidencare.” The idea  essentially is to build on Obamacare, officially known as the Affordable Care Act, by adding a public option.

This would be short of the “Medicare for All” proposal backed by the left wing of the Democratic Party, but would put government in charge of a health insurance plan that would compete with the private market.

Biden said the public option, in which the government would subsidize cheaper insurance plans, would reduce costs for patients by negotiating lower prices from hospitals and other health care providers.

Biden has called for providing two years of community college for “free.”

This initiative would include illegal immigrants who came to the United States as minors, a demographic frequently called “Dreamers.” It would extend to individuals in job-training programs.

Biden also said he wants to make public colleges and universities free for students who come from families with an annual income below $125,000.

Biden adopted the proposal from a primary opponent, Sen. Bernie Sanders, I-Vt., who sponsored the College for All Act of 2017.

Biden said he would push for passage of the Equality Act for transgender Americans during his first 100 days in office.

Already passed by the Democrat-controlled House, the law would add “sexual orientation” and “gender identity” as protected classes under the Civil Rights Act of 1964.

Many conservatives are concerned that the move would threaten Americans’ religious liberty and privacy—particularly faith-based charities.

“The plan, which would require America’s institutions to ‘enforce [LGBT] rights,’ would be harmful to religious liberty and to the rights of women, parents, and children,” wrote Andrea Jones and Alex Richey for The Daily Signal earlier this year.