6 Things to Know About the Hyde Amendment 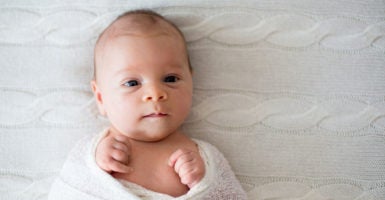 Rep. Henry Hyde, R-Ill., was behind the amendment, first passed in 1976, that prohibits use of federal funds for most elective abortions. (Photo: Getty Images)

Former Vice President Joe Biden came out Thursday against the Hyde Amendment, after previously supporting it.

“If I believe health care is a right, as I do, I can no longer support an amendment that makes that right dependent on someone’s ZIP code,” Biden said at a gala hosted by the Democratic National Committee in Atlanta.

For decades, Congress has kept taxpayer funds from paying for abortions due to the leadership of an Illinois congressman.

Rep. Henry Hyde, R-Ill., was behind the amendment, first passed in 1976, that prohibits use of federal funds for most elective abortions.

Melanie Israel, a research associate in the DeVos Center for Religion and Civil Society at The Heritage Foundation, told The Daily Signal in an email that the Hyde Amendment is one of the most significant legacies of the pro-life movement.

“One of the pro-life movement’s first victories following the Roe v. Wade and Doe v. Bolton decisions in 1973, which effectively legalized abortion on-demand across the country, came about thanks to Congressman Henry Hyde of Illinois in 1976,” Israel said.

“He championed an amendment to the annual [Health and Human Services] appropriations bill which prohibited the department from expending taxpayer dollars for most abortions. Since then, similar language has been included in appropriation bills for HHS as well as other departments, and was upheld by the Supreme Court in 1980.”

Here are six things to know about the Hyde Amendment.

1. It’s Been Included in Some Form of Legislation Since 1977

According to Israel, when Congress passed the 1977 fiscal year appropriations bill in 1976, the Hyde Amendment was included in that legislation and has since been applied annually in some form.

The Hyde Amendment was upheld in Harris v. McRae by the Supreme Court in 1980 after being challenged in federal court after its passage.

The Supreme Court held that “the funding restrictions of the Hyde Amendment do not impinge on the ‘liberty’ protected by the due process clause of the Fifth Amendment held in Roe v. Wade … to include the freedom of a woman to decide whether to terminate a pregnancy.”

3. It Has Received Bipartisan Support

A report from the American Center for Law and Justice details that the Hyde Amendment has received bipartisan support in Congress and from both Democrat and Republican presidents.

During former President Bill Clinton’s presidency, he signed “a slightly modified version of the Hyde Amendment into law each year that allowed for taxpayer funding to be used for abortions through Medicaid funding in cases of rape and incest, an extremely small number of abortions,” according to the report.

Additionally, in 2010, former President Barack Obama signed an executive order that reaffirmed the Hyde Amendment, which “restates a policy barring the use of federal funds to pay for most abortions,” as the Los Angeles Times reported.

The Amercian Center for Law and Justice also says that the abortion-funding ban is a critical safeguard to protecting religious freedom.

“Paramount to providing a venue for debate about the sanctity of life, the Hyde Amendment protects the religious liberty and freedom of conscience for millions of pro-life Americans,” the report from the American Center for Law and Justice reads.

“Abortion advocates constantly argue that abortion is a decision between a woman and her doctor. Yet if the Hyde Amendment is repealed, every American will become involved in abortions through the use of our tax dollars. For those of us who believe every life is precious no matter the circumstances, the consequences are dire.”

5. Hyde Amendment May Have Saved Lives of 2 Million

“Since 1976, the best research indicates that the Hyde Amendment has saved over two million unborn children,” states a 2016 report from the Charlotte Lozier Institute, a pro-life research organization.

The report also looked at how the Hyde Amendment may have affected Medicaid recipients:

[T]hree separate studies that analyzed Medicaid recipients in Illinois, Texas, and Ohio found that after the Hyde Amendment took effect, the birthrate among women on Medicaid increased by anywhere from 11 percent to 15 percent. The average increase in the Medicaid birthrate was almost 13 percent.

6. Over Half of Americans Don’t Want Taxpayer Funds to Go to Abortions

A 2019 Marist poll found that 54% of Americans do not support tax dollars going to pay for abortions. The poll, which was commissioned by the Catholic organization the Knights of Columbus, found that 39% of Americans backed taxpayer dollars funding abortion.