Government, Not Investors, to Blame for Affordable Housing Crisis 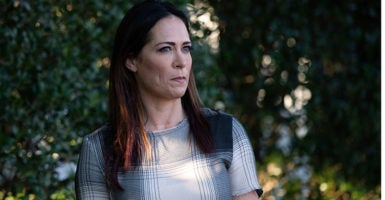 Stephanie Grisham will continue her role as spokeswoman for the first lady, while filling the two vacancies for President Donald Trump. The announcement was made Tuesday.

Grisham’s previous title was assistant to the president and chief of staff for communications for the Office of the First Lady.

In a White House known for high turnover, Grisham will be the third press secretary, replacing Sarah Huckabee Sanders, whose last day will be June 30, and the fifth communications director, replacing Bill Shine, who left the post in March.

In a somewhat unusual move, the first lady—rather than the president—made the announcement in a tweet. The tweet highlighted Grisham’s role with both the president and first lady.

“I am pleased to announce @StephGrisham45 will be the next @PressSec & Comms Director!” first lady Melania Trump said in a tweet. “She has been with us since 2015 – @potus & I can think of no better person to serve the Administration & our country. Excited to have Stephanie working for both sides of the @WhiteHouse.”

Speaking to pool reporters in the Oval Office on Tuesday afternoon, the president declared Grisham would be “fantastic” in the position.

Holding multiple communications roles in the White House is unusual.

It’s unknown at this point whether Grisham will bring back regular press briefings, which were mostly eliminated under Sanders.

Grisham previously served in Republican campaigns in Arizona, including as a spokeswoman for the unsuccessful 2012 presidential campaign of Republican nominee Mitt Romney, now a senator from Utah and a GOP critic of Trump.

After the Romney campaign, she ran a public relations firm in Arizona before joining the Trump campaign.

After Trump was elected, Grisham briefly was a deputy press secretary under the administration’s first press secretary, Sean Spicer, then moved to the first lady’s office in February.