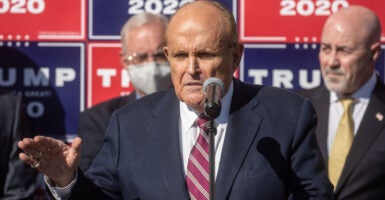 Rudy Giuliani speaks at a press conference held in the back parking lot of landscaping company on Nov. 7, 2020 in Philadelphia, Pennsylvania. (Photo: Chris McGrath/Getty Images)

The Trump campaign is moving ahead with a lawsuit in Pennsylvania, saying President Donald Trump was denied a “fair count” of votes in his contest against Democratic challenger Joe Biden and that poll watchers were not able to properly oversee the process.

Rudy Giuliani, one of Trump’s attorneys and the former mayor of New York City, announced details of the lawsuit Saturday at Four Seasons Total Landscaping in Philadelphia.

“What the case alleges is very simply that President Trump’s campaign was denied its right to a fair count, which is a deprivation of civil rights,” Giuliani said.

About 50 or 60 Philadelphia poll watchers, who were denied the right to inspect an estimated 150,000 to 200,000 mail-in ballots, have agreed to testify in court. Several of those individuals spoke in support of the investigation during Saturday’s press conference.

Brooks said he was first kept 20 feet away from those counting the ballots and given stern instructions not to use his phone to take pictures or video. Later, he was allowed to stand 6 feet away but was still not shown any of the ballots.

“We were kept away from everything,” Brooks said.

Lisette Tarragano, a retired attorney and Philadelphia resident, said she decided to be a poll watcher because the “American way of life” is being threatened

Upon arriving at the ballot counting location, Tarragano said, she and five or six other Republican poll watchers were told they were not listed in the system and could not enter the counting site. She was never able to get in.

“I felt insidious fraud going on,” Tarragano said. “I felt that we were kept away from doing our civil duty.”

In the middle of a unique election with a record high number of mail-in votes cast and concerns over voter fraud, Giuliani said he assumed Philadelphia’s leaders would have done all they could to ensure poll watchers could do their job.

“If you have nothing to hide with these mail-in ballots, you allow inspection,” he added.

The standard practice for absentee ballots, Giuliani said, is that each ballot is opened in front of a Republican and Democrat poll watcher. If neither objects to the ballot, then it is counted. If there is objection by either party, it is set aside for further review.

Republican poll watchers in Pittsburgh allegedly also were not permitted to observe the counting of 300,000 mail-in ballots.

Trump was leading over Biden by about 700,000 votes two days ago, Giuliani said, adding that he does not find it a coincidence that the president’s lead disappeared as Republican poll workers were not allowed to observe ballots in either Pittsburgh or Philadelphia.

“The people of this city, the people of this country, have no assurance” that the mail-in votes counted after the polls closed were counted accurately, he said, because the ballots would have had to “have been almost unanimously cast for Joe Biden in order [for him] to catch up.”

Pennsylvania did not begin to count mail-in votes until after polls closed Tuesday. A state Supreme Court ruling allowed ballots to be counted that were received up to three days after the election, providing no evidence existed that the ballot was mailed after Election Day.

The ruling was appealed to the U.S. Supreme Court, but a 4-4 decision by the high court meant that the decision by Pennsylvania’s highest court stood.

Giuliani was clear that he is not “attacking the people of Philadelphia.”

“I’m attacking your decrepit Democratic machine, which has a lot of other reasons to be attacked,” the former New York mayor said.

To remedy the alleged fraud, Giuliani suggested the courts could rule not to count votes that were not properly inspected by poll workers.

Despite Biden being declared the election winner Saturday by media outlets, Giuliani said Trump will not concede when “at least 600,000 ballots are in question.”

“Networks don’t get to decide elections, courts do,” Giuliani said.

The Associated Press declared former Biden the winner around 11:30 a.m. after calling Pennsylvania for him, bringing the former vice president’s electoral college votes up to 284.

Less than two hours before Biden was named the winner by mainstream media outlets, Trump tweeted, “I WON THIS ELECTION, BY A LOT.”

Giuliani said the Trump campaign’s lawsuit may expand to affect other states as investigations of polling places and mail-in votes continue.