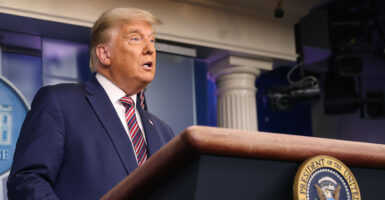 President Donald Trump speaks Thursday evening in the briefing room at the White House as votes continue to be counted two days after the presidential election. (Photo: Chip Somodevilla/Getty Images)

We all knew Election Day 2020 wouldn’t be normal. And yet it still seems remarkable that we don’t know yet who will be the president of the United States on Jan. 20.

And we may not know for some time if we’ll have four more years of President Donald Trump or a newly inaugurated President Joe Biden.

Even if news organizations declare a winner in the close presidential race, that’s not the official result. States have until Dec. 8 to settle any election disputes and certify their results before the meeting of state electors in every state Dec. 14, when they cast their Electoral College votes for president.

While knowing who won a presidential election usually doesn’t take this long, it isn’t unprecedented if it does. Think back to Bush v. Gore. There, the race between Texas Gov. George W. Bush and Vice President Al Gore wasn’t decided until December, when the U.S. Supreme Court stepped in to end any further vote recounts in Florida because of the mistakes made by state courts and election officials.

Everyone hopes it won’t come to that again, but election-related litigation is already underway at a dizzying pace and could play a key role in deciding what has morphed into an incredibly tight race.

Here’s a look at legal fights in key states.

The Pennsylvania Supreme Court had also ruled that state officials could not reject late-received ballots unless they could produce evidence that the ballots were mailed after Election Day—and that they could not reject ballots due to mismatched voter signatures. That’s a basic ballot integrity procedure used in many jurisdictions.

The U.S. Supreme Court also declined a subsequent request to rule on the merits of the dispute before the election, and may now have put itself in the unenviable position of ruling on the merits of the dispute after the election—which could, in effect, decide the outcome. Presumably recognizing this fact, President Donald Trump’s campaign filed a motion Wednesday to intervene in the case.

Still, that’s not the only pending litigation in Pennsylvania. It gets messy, so hold on.

Also on Wednesday, the Trump campaign filed a lawsuit seeking to allow observers to be close enough to actually observe the counting of ballots in Philadelphia. A Pennsylvania state trial court rejected the request, but the next day, a Pennsylvania appellate court reversed the ruling.

The appeals court said that “effective immediately … all candidates, watchers, or candidate representatives [shall] be permitted to be present for the canvassing process … and be permitted to observe all aspects of the canvassing process within 6 feet, while adhering to all COVID-19 protocols, including, wearing masks and maintaining social distancing.”

The Philadelphia Board of Elections filed an emergency petition that same day (Thursday) with the Pennsylvania Supreme Court, asking it to overturn the appellate court’s decision. The petition remains pending there.

But that’s not the end of this particular saga.

After the Pennsylvania intermediate appellate court issued its order, the Trump campaign filed a lawsuit in federal district court in Philadelphia claiming that the Board of Elections is “nonetheless continuing to count ballots, without any observations by any representatives or poll watchers of President Trump and the Republican Party.”

Clearly, this issue remains to be resolved, given that Philadelphia is apparently refusing to comply with the court order.

The Trump campaign and the Republican National Committee also filed a lawsuit where they argued that the Pennsylvania secretary of state wrongly extended the deadline from Nov. 9 to Nov. 12 for absentee and mail-in voters to provide missing proof of identification.

Republican candidates and officials also filed a lawsuit challenging Montgomery County officials’ decision to notify voters whose ballots are defective and give them a chance to “cure” the defects—something not authorized under state law.

Other outside groups, such as the Public Interest Legal Foundation, have also filed lawsuits. The foundation specifically filed a suit against the Pennsylvania Department of State for failing to maintain accurate voter rolls and remove individuals who have died, moved out of state, or otherwise become ineligible to vote.

Trump’s campaign lost legal challenges in both Georgia and Michigan on Thursday.

In Georgia, the Trump campaign filed a lawsuit after a GOP observer said he had observed Chatham County (Savannah) election officials comingling late ballots with on-time ballots. Absentee ballots in Georgia must be received by the end of Election Day. After hearing testimony from both sides of the dispute, a Georgia state court judge dismissed the case.

In Michigan, like in Pennsylvania, the Trump campaign filed a suit against the secretary of state, asking to be allowed to “meaningfully participate and oversee” the vote-counting process.

However, because the vote counting, done primarily by local officials, had already been completed, the judge denied the request. She said that in her view, there was no meaningful relief left to provide.

Other claims were also raised in Georgia and rejected. What is unexplained is why election officials refused to comply with a state law that requires qualified poll watchers to be able to observe every aspect of the voting and ballot-counting process.

Just like in Philadelphia, one has to wonder—what were they trying to hide?

The Trump campaign has also teased, but hasn’t yet filed, a lawsuit in Nevada where it alleges that many ineligible voters—some deceased, some nonresidents—cast votes.

The significant problems with Nevada’s voter rolls have been well documented, including by the Public Interest Legal Foundation, which recently produced a video showing voters illegally registered at commercial businesses such as casinos and pawn shops, as well as vacant lots.

In Arizona, the Public Interest Legal Foundation has also filed a lawsuit against Maricopa County on behalf of voters who claim they were unable to cast a ballot due to errors by election officials.

They allege they were given Sharpies to complete their ballots, even though the computer scanners used with opti-scan paper ballots cannot process such ballots.

Clearly, this election has generated significant litigation. We can’t help but wonder if a lot of it could have been avoided if election officials had heeded our warnings about the dangers of mail-in voting and changing election procedures too close to an election without their state legislature’s approval.

We might also have avoided some of these problems if election officials had complied with their state laws guaranteeing candidates and political parties complete access to the process. Failure to do so damages the transparency essential to maintaining public confidence in the integrity of elections.

Two things should be kept in mind.

First, gathering the evidence of misconduct, fraud, and other problems that may have compromised an election is extremely difficult and expensive.

As an Indiana state court pointed out in an election fraud case in 2004, “the time constraints that govern election contests, primarily designed to serve important interests and needs of election officials and the public interest in finality, simply do not work well in those elections where misconduct” is widespread and multifaceted.

Second, courts are usually very reluctant to overturn election results even with substantial evidence of possible problems that raise questions about the legitimacy of the outcome. Thus, no matter what the merits are of the claims being made by the Trump campaign, they face an uphill battle in the courts.

Here’s what’s clear at this point: Every legally cast ballot should count and be counted. Those that were not legally cast should not.

Hopefully, this litigation will be a reminder that clear election rules established by state legislatures well before an election can avoid delays and problems after an election. The same is true if election officials comply with the law instead of defying it.

In other words, as Benjamin Franklin wisely advised in 1736: “An ounce of prevention is worth a pound of cure.”