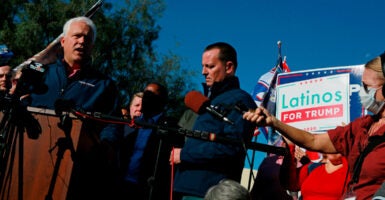 Lawyers for the Trump campaign are going to federal court in Nevada to demand that election officials stop counting ballots that the campaign claims were cast in the names of voters who are dead or no longer state residents.

But Joe Gloria, Clark County’s registrar of voters, told reporters shortly afterward that he doesn’t know of any evidence of illegal votes reported directly to election officials by the Trump campaign.

“My response is that we are not aware of any improper ballots that are being processed,” Gloria said.

Clark County, home to Las Vegas, is by far the most populous of Nevada’s 17 counties.

As many as 10,000 nonresidents voted in the presidential election, Trump campaign representatives allege.

At stake are Nevada’s six electoral votes, which some calculations—including those of The Associated Press and Fox News Channel—say would give Biden the exact total of 270 electoral votes he needs to defeat Trump and become president-elect.

“The fact is, we are filing this federal lawsuit to protect legal voters,” Grenell, former acting director of national intelligence for the Trump administration, told reporters at the press conference in North Las Vegas. “It is unacceptable in this country to have illegal votes counted, and that is what’s happening in the state of Nevada.”

“Look, the reality is that transparency is not political,” Grenell told reporters, adding in a reference to former Sen. Harry Reid, D-Nev.:

Ballots are not automatically legal votes until they’re checked. We are not being allowed to check. The Harry Reid machine recklessly threw ballots into the mail, and now we cannot check. … It’s publicly available information that nonresidents have voted. …

We’ve asked Clark County for answers. They have no answers. They continue to count illegal votes. That is unacceptable, and it’s giving legal [residents] a sense that the system is corrupt. We have to have a system where legal votes are cast. … and we are seeing discrepancies all over.

>>> Related: Trump Takes His Case to Court in 3 Battleground States

The Trump campaign also is pursuing legal options in the three other states still considered too close to call: Georgia, North Carolina, and Pennsylvania.

The Trump campaign representatives introduced Clark County resident Jill Stokke, who said election officials turned her away at her polling place Tuesday because someone using her name already had sent in a ballot by mail.

“I went to vote and was told I already voted. I pursued the matter,” Stokke told reporters in brief remarks. “In years past, I always voted in person. This time they mailed out the ballots, and somebody took my ballot; they also took the ballot of my roommate.”

She brought her complaint to me. We reviewed the ballot, and in our opinion it’s her signature. We also gave her an opportunity to provide a statement, if she wanted to object to that, and provide a challenge to that. She refused to do so. A member of the Nevada Secretary of State’s Office investigative team also interviewed her, and they had no issue with the assistance that we tried to give her.

A reporter asked Gloria whether he thought Stokke was lying.

“I have nothing else to comment on,” he said. “Next question.”

Gloria, registrar of voters since 2013 and a county employee for nearly 26 years, began his press conference by outlining where vote counting stands in Clark County.

He said election officials intend to count more than 51,000 mailed ballots Thursday and post the results Friday. All in-person ballots have been counted, and the bulk of mailed ballots will be counted by Saturday or Sunday, he said.

Under state law, next Tuesday is the last day for election officials to receive and count mailed ballots postmarked by Nov. 3, Gloria said.

Next Friday, Nov. 12, is the last day for officials to resolve issues with voters and count any remaining ballots that meet state guidelines, he said.

A reporter asked Gloria whether the counting is going more slowly than in 2016.

“I think its important for the entire country to understand that mail ballots on this scale is very new to the state of Nevada,” the registrar of voters said, adding:

We made a decision here to provide as much access as we could as a result of the pandemic, and so our process has run a little bit slower. We also need to make sure that our data is being updated because we need to prevent people from voting twice in the system. And so we have to scan those in as mail received so that it updates the database so that our in-person voters can’t have voted twice. …

So, our goal here in Clark County is not to count fast. We want to make sure that we’re being accurate. The results in the state of Nevada obviously are going to be very important to the entire country and that is our No. 1 goal.