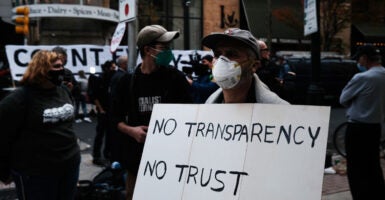 The fact that Americans are experiencing any confusion, uncertainty, and distrust at all right now means that we must safeguard the integrity of our election process. Pictured: Protesters, police, members of the media, and others converge outside of the Philadelphia Convention Center as the counting of ballots continues in the state on Nov. 6. (Photo: Spencer Platt/Getty Images) 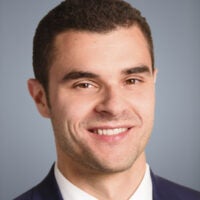 Christian Mysliwiec is the commentary editor of The Daily Signal.

Many Americans were prepared to wake up Wednesday without having a winner of the presidential election decided yet. Election officials had to count an unprecedented number of mail-in ballots due to COVID-19, so some delay was to be expected.

What many Americans were not prepared for was the confusion, uncertainty, and distrust that the country was plunged into.

Multiple states still are undecided, and the process of resolving this uncertainty turned nasty.

The position of Joe Biden and his supporters is to “count every vote.” President Donald Trump’s representatives, on the other hand, are calling for only legal votes to be counted.

The Trump campaign is reacting to accusations of corruption and fraud occurring in several key swing states, as well as reports in some areas that election officials refused to allow qualified GOP observers to observe the ballot-counting process.

These accusations prompted the Trump campaign to seek a recount in Wisconsin and to file lawsuits in Georgia, Michigan, Nevada, and Pennsylvania.

It’s an ugly development in an already ugly year, and it is making Americans across the country lose confidence in the election process. That is absolutely poison for the health of our democracy.

The reason our democratic republic has functioned as well as it has for the past 231 years is because of our trust in the electoral process.

That’s why adversarial nations use election interference as a weapon against democracies around the world.

The truth of what happened in Arizona, Georgia, Michigan, Nevada, Pennsylvania, and Wisconsin remains to be seen. Given the unusualness of holding an election during a pandemic, and the massive influx of mail-in ballots that come with it, it is eminently reasonable to take a closer look at the vote-counting process.

Unsurprisingly, the left has a plan of attack for this very eventuality.

The Trump campaign’s attempt to investigate potential fraud plays into a narrative that the left has promulgated weeks ago: that Trump will stage a coup if he doesn’t like the results of the election.

“Donald Trump may win or lose, but he will never concede,” asserts a writer at The Atlantic.

A chorus of similar articles from left-leaning publications primed their readers to anticipate that the president of the United States would behave like a despotic dictator should the vote not go in his favor.

“If Trump won’t concede, these activists have a plan. Groups like the Movement for Black Lives, the Sunrise Movement, and the Women’s March are ready for November 4,” declared Vox the day before Election Day.

The website ProtectTheResults.com, paid for by the leftist organizations Stand Up America and Indivisible Action, will direct visitors to nearby protests.

Clearly, enormous thought and preparation have gone into blocking the Trump campaign from investigating possible fraud and irregularities while the election remains undecided. To protract this period any longer only prolongs this tension, introduces more opportunities for fraud, and further erodes confidence in the legitimacy of the election process.

So how can we prevent this from happening again?

The fact that Americans are experiencing any confusion, uncertainty, and distrust at all right now means that we must safeguard the integrity of our election process.

Legal experts at The Heritage Foundation long have fought to bolster election integrity. They maintain a database of election fraud cases in the U.S. and identify the voting policies being pushed by the left that would make our elections even more insecure.

Heritage’s experts in the rule of law offer a clear road map to making sure the ambiguity and distrust we face today does not happen again.

Not surprisingly, they have received vicious backlash for suggesting that election fraud exists, especially from mainstream media outlets.

But if the 2020 election provides us with at least one lesson, it is that we cannot delay safeguarding the integrity of our election process.

For now, we should determine the winner of the election without delay. As we do so, let’s not simply count every vote, but count every legal vote.