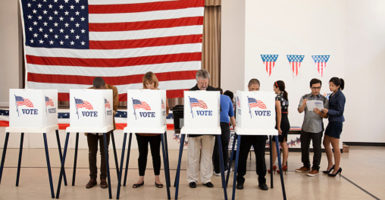 Trump administration officials are working with state and local officials, as well as political parties and campaigns, to help secure the 2020 elections. (Stock Photo: Getty Images)

Russia isn’t the only threat to election security going into 2020, as Trump administration officials say they are preparing for meddling from Iran, China, and North Korea.

The federal government anticipates that Russia will again meddle in the U.S. election in 2020 through “Russian-controlled or influenced English-language media, false-flag operations, or sympathetic spokespersons,” a senior intelligence official said.

China’s government finances English-language media outlets in the United States to influence U.S. perceptions on various issues, such as trade, the senior intelligence official told reporters during a briefing on election security.

“No surprise to you: Iran is increasing their use of social media to promote strategic goals and perspectives to the American public,” the official continued. “Its influence campaigns have included denigrating U.S. decisions to leave [the Iran nuclear deal], downplaying the effectiveness of sanctions, and promoting pro-Iranian interests.”

Administration officials asked reporters that the conference participants’ names not be used.

North Korea is also in the mix, said a senior law enforcement official, who spoke of the FBI Foreign Influence Task Force set up in 2017 to combat the international meddling.

“We’ve since expanded our scope to look at any nation-state actors involved in foreign influence, including China, Iran, and North Korea, among others,” the senior law enforcement official said.

Federal prosecutors determined that in 2016, Russian state actors hacked the computer systems of the Democratic National Committee and some state voter rolls, and pushed fake narratives on social media to harm Democratic presidential nominee Hillary Clinton and to help her rival, Donald Trump.

A 22-month investigation by special counsel Robert Mueller determined the Trump campaign did not conspire or collude with Russia.

Every presidential campaign has gotten or will get a briefing from officials from the Department of Homeland Security, the Office of the Director of National Intelligence, the FBI, and the Justice Department, one senior administration official said.

“Throughout 2018, we worked with both major political parties to help provide information and support and services, and we’re expanding that reach now, through outreach to the presidential campaigns,” the senior administration official said.

Decentralized elections are a strong defense against fraud and hacking, because there isn’t a national computer network to hack. However, the Department of Homeland Security is seeking to facilitate communication between local governments to fend off threats.

“There are over 8,800 jurisdictions in the United States that run elections, and working with the states, we’d like to find a way to reach as many of those as possible with not just our support and services, but signing up for things like the Election Infrastructure Information-Sharing and Analysis Center, so that they can have, at the tip of their fingers, information regarding threats and risks to their systems that they own and operate,” the senior administration official said.

Last week, state and local governments participated in a national virtual tabletop exercise for election security hosted by the Department of Homeland Security, said Maria Benson, spokeswoman for the National Association of Secretaries of State.

Secretaries of state are the chief election officers in 40 states.

“Because elections are now designated as critical infrastructure, an Election Infrastructure Government Coordinating Council … was established to enable improved communications between state and local officials and the federal government, and to share resources,” Benson told The Daily Signal in an email.

Originally piloted in 2017 and fully enacted in April 2018, an Election Infrastructure Information Sharing and Analysis Center … was formed, in which all 50 states are members, along with over 1,500 local jurisdictions.

Most states are in good shape for secure elections, said Hans von Spakovsky, manager of the election law reform project at The Heritage Foundation.

“The best defense is for state election officials to have top-line cybersecurity programs to prevent hacking into voter registration systems, which will take a lot of money and resources,” von Spakovsky told The Daily Signal.

Though voter registration lists have been compromised, thus far, there has been no evidence of ballot tampering through electronic means, von Spakovsky said.

There has been no evidence of hacking the casting or counting of votes. Voting machines are decentralized. They are not networked. So, it would be extremely difficult.