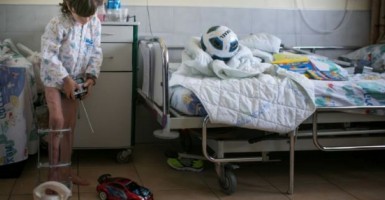 A Syrian boy, playing here with a remote-control car, is walking again after successful surgery in Israel. He had 17 previous operations in Syria. (Photo courtesy Ziv Medical Center)

ZEFAT, Israel—An Israeli hospital near the border with Syria quietly has become a sanctuary for Syrians wounded in their country’s bloody civil war.

For going on three years, Israel has discreetly treated wounded or injured Syrians, many of whom were brought up to hate the Jewish state. At the front lines of the humanitarian medical operation is Ziv Medical Center in Zefat.

The Israeli government authorized four hospitals to treat Syrians. Ziv, just 19 miles from the border, receives the majority of the most critically wounded civilians—and sometimes fighters.

Patients return to Syria after treatment, a social worker at Ziv says, because although it is “a scary place,” it’s still home.

The operation described to The Daily Signal remains unimaginable to many, considering the long-standing animosity between the two nations.

Yet, in the desperate hours of a seemingly never-ending conflict, compassion and respect are what one Israeli doctor, in a video provided by Ziv, calls “planting seeds of peace.”

From Syria to Israel

In the northeast, Israel shares a 40-mile-long border with Syria in the disputed Golan Heights region. Until last August, the United Nations served as the official observer of the ceasefire following the end of the 1973 Arab-Israeli war, also known as the Yom Kippur war.

For more than 40 years, the Israeli-Syrian border was relatively quiet.

As a result of the hostage crisis, the U.N. observer mission deserted its post on the Syrian side and now observes only from the Israeli side of the border. Israel has since built a fence along the border with Syria as an added security precaution. Despite the divisive and hostile relationship with the regime and terrorist groups within Syria, since early 2013 Israel has provided medical treatment to the most critically wounded Syrians.

Access to information about the humanitarian medical mission is highly restricted because of the nature, condition and origin of the patients. The nature of Ziv Medical Center’s operation also is controversial among some Israelis, and hospital officials maintain a low public profile.

The Daily Signal learned these aspects of how the operation works:

Once across the border, Israeli Defense Forces (IDF) medical teams initially screen the wounded Syrians. They send those with serious injuries and trauma requiring intensive medical assistance to a field hospital near the border.

If the field hospital is unable to provide adequate care, it transports the patients to one of four authorized hospitals throughout Israel—Ziv being the likely destination for many.

Israel continues to maintain a strict “no questions asked” policy, ensuring that its public position of neutrality is maintained in the conflict in Syria.

“We see Syria as a scary place, [but] it has become normal life for Syrians,”  Fares says.

Reports indicate that the medical team treated a top leader in the Nusra Front terrorist group. The operation came under intense scrutiny after a mob made up of Israeli members of the Druze sect attacked an IDF medical convoy transporting Syrians for medical care. One Syrian was killed.

The Israeli Druze are critical of the operation, arguing that the IDF are treating and helping terror groups, including the Nusra Front, that killed at least 20 Syrian Druze in June.

Why Go to Israel?

Israeli officials say they’re not clear how or why Syrians wounded in the war come to arrive at the border with the Golan Heights.

However, many Syrians who have undergone treatment in Israel say that, if given the chance to choose between treatment in Jordan and in Israel, they will choose Israel.

Linda, a Ziv Medical Center official who asked that her full name not be used, says part of the reason is the high level of care expected in Western-style hospitals. Plus care for the wounded Syrians is free of charge.

However, many arrive at the border unconscious and barely alive from bomb blasts, trauma and severe shrapnel wounds. They are unaware they are in Israel until they awaken in a hospital bed in a country they’ve been taught to hate since birth.

Syrians sometimes arrive with a doctor’s note pinned to their clothing. Others clearly have been treated in Syria before coming to Israel.

One 7-year-old boy who arrived at Ziv already had undergone 17 unsuccessful operations. He had been told he would never walk again. But after one surgery at Ziv, he regained the use of his leg and is now able to walk unassisted. Map by Kelsey Lucas/Visualsey for The Daily Signal

A People without Options

The current state of medical care in Syria is nearly nonexistent.

By U.N. estimates, 70 percent of Syria’s medical establishment has fled the country because of the conflict. Many of the nation’s health care facilities have been damaged if not destroyed.

As in much of Syria, a mix of pro- and anti-regime forces—including President Bashar al-Assad’s forces, the Free Syrian Army and extremist groups such as the Nusra Front—hold positions along the Israeli border.

Civilians get caught in the crossfire. Car accidents in the wrong place at the wrong time can mean an injured person won’t seek treatment at what is left of government facilities. He or she fears being seen as supporting an anti-regime group and being refused care or, worse, arrested.

Israel, then, plays an important humanitarian role not only for those wounded in bomb blasts, but also civilian non-combatants injured in car crashes or machinery accidents. Johnny the Clown made this teenage girl’s hospital stay a more pleasant memory.

Ziv has treated approximately 500 Syrians ranging in age from newborn to 80, according to official figures. About 75 percent are adult males, eight percent are women, and 17 percent are children.

Inevitably, given the inhuman brutality occurring just across the border, Ziv receive not only patients suffering the physical effects of the war. The hospital also must address the immense psychological trauma for patients who often have lost everyone and everything.

The task is especially challenging when it involves children.

To help calm and in some cases distract children from painful procedures, Ziv employs a special staff member: Johnny the Clown. Johnny has become an integral member of the team that supports and cares for Syrian kids.

One is Fares, a social worker at Ziv since 2013. Fares, who asked The Daily Signal not to publish his last name, helps break the monotony of what can be long recoveries.

Because he speaks Arabic, Fares can communicate directly with patients to convey vital medical information, address concerns and fears, and in some cases help break down decades-old misconceptions about Israel.

Many patients are scared when they arrive, Fares says. When it’s time for them to leave, he says, they have become comfortable in their surroundings.

Departing from the hospital, the mother of one teenage patient tells The Daily Signal she was grateful for the care her daughter received. She hopes to meet Fares again one day, when peace has come to the region. Bloodstained notes by a Syrian doctor were pinned to the clothes of a patient who ended up at Ziv.

Once they are transported back to Syria, little is known about what happens to patients who are treated and discharged from Ziv and the other three authorized hospitals.

The Israeli government maintains a strict “no Syrians” refugee policy. After receiving care, patients must recross the border.

Many are eager to go back, despite the dangers they face. Syria is their home. While being treated at Ziv, they express a desire to heal quickly so they can be reunited with their families.

“[Although] we see Syria as a scary place, it has become the normal life for the Syrians,” Fares says.

Many Syrians tell him that “if we must die, we prefer to die with our family.”

Ziv’s staff members worry that, after returning home, their Syrian patients will be targeted because they received medical care in Israel. As a result, the hospital makes efforts to ensure that discharge papers and medical instructions are in Arabic and show no indications of Israeli care.

Given the complicated nature of the injuries and the advanced devices required for a proper recovery, though, the Western-style medical care involved is often evident. Doctors at Ziv operated on this Syrian girl’s injured leg.

The humanitarian operation is complicated, particularly given Israel’s commitment to maintaining a neutral position on the Syrian civil war. The government doesn’t want its citizens and armed forces to become a target of Assad’s regime or the Nusra Front.

As the war rages on, more fighters from both sides likely will seek treatment in Israel. That circumstance ultimately could disrupt cohesion with minority communities such as the Druze.

Assuming that the conflict eventually ends, Israel will have to live alongside the victor. The thinking is that bridges built through medicine and medical care could pay dividends of peace in a post-war era.

Although Syrians treated at Ziv may not readily admit it afterward, the number of the wounded and injured arriving at the border for care suggests a different reality from what one might expect.

It’s a development that Israelis, Syrians, and others in the region could not have fathomed just five years ago: despite the hostility with which they were taught to view Israel, a growing number of Syrians appear to see their neighbor as their best hope for survival.