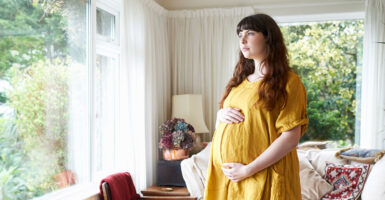 The Biden administration has decided to bleep out the word “mother” and replace it with “birthing people,” but struggles to explain the change. (Photo: Dougal Waters/Getty Images)

Joe Biden ran on an absurdly radical platform for a “moderate,” but it looks like he saved a lot of his truly crazy ideas for the White House. Just when Americans think his policies can’t get any more deranged, he unleashes a budget that cancels moms.

In a bizarre attempt to transgender the English language, Biden has decided to bleep out the word “mother” and replace it with “birthing people”—a demeaning term that reduces women to some sort of utilitarian breeding center in another effort to eradicate gender. And yet, when Biden’s wokest leaders have been asked to explain the change, they can’t or won’t.

In Wednesday’s Senate committee meeting, Health and Human Services Secretary Xavier Becerra struggled to field questions on why the word “mom” is being treated like the world’s newest profanity. When Sen. James Lankford, R-Okla., pressed him, “Can you help me get a good definition of ‘birthing people?'” the secretary fumbled awkwardly for an answer.

“I was a little taken aback when I read it,” Lankford said. He asked, what’s the point of the shift? Will there be regulations to go along with it? Becerra told him again that he’d have to “go back and take a look.”

Becerra didn’t answer. Instead, he repeated, “Senator, I’ll go back and take a look at the terminology that was used and get back to you. But again, we’re trying to be precise … ” Well, Lankford said, “‘Mom’ is a pretty good word that’s worked for a while. And I think it’s pretty precise.”

Shalanda Young, Office of Management and Budget deputy director, also came under fire when she testified about the budget on the House side.

Rep. Jason Smith, R-Mo., was just as incredulous about the phrase “birthing people,” and Young replied, “There are certain people who do not have gender identities that apply to female and male, so we think our language needs to be more inclusive on how we deal with complex issues.”

So, Smith followed up, “Is the administration’s official policy to replace the term ‘woman’ with ‘birthing people?'” “I think our official policy,” Young said, “is to make sure that when people get service from their government that they feel included, and we’re trying to use inclusive language.”

But how about making sure the 99.99% of mothers who are women feel included?

Smith could only shake his head in astonishment. “Joe Biden and Washington Democrats are trying to turn America into crazy town,” he fumed in an interview later. “One of the proudest moments that any of us have is whenever we get the title of mom or dad … And the fact that you have the woke liberal left trying to take motherhood from moms by trying to redefine the word … it’s absolutely absurd.”

But then, he said, “we’ve learned that when Democrats are in charge, these are the kind of priorities they have.” Don’t forget, he reminded people, “on the opening prayer of Congress this year, they didn’t even use the word ‘amen.’ They said ‘amen and a woman.’ You just can’t make this stuff up.”

In the fantasy land known as the Democratic Party, social justice now requires that you deny biology, science, morality, and common sense. But equally disturbing, Republicans agree, is Becerra’s refusal to admit that something else exists: a law against partial-birth abortion. Six times he refused to acknowledge that the practice was illegal in the Senate hearing.

Sen. Steve Daines, R-Mont., was not deterred. He kept on, doggedly determined to get some sort of recognition on the established law. “Is partial-birth abortion legal or illegal in the United States?” he pressed. “A woman has a right in this country to exercise reproductive choice,” the former California attorney general replied. “Is it illegal?” Daines asked again. Becerra ignored him, talking again about Roe v. Wade.

On the final attempt, Becerra said, “Senator, I’ll direct you then to the decisions that the courts have issued with regard to that particular statute if you like, and that’s why I continue to repeat to you is that what is the law is the right of a woman under Roe v. Wade to receive reproductive health care services.”

Of course, this isn’t the first time Becerra has eschewed the 2003 law (which, incidentally, he voted against as a member of the House). His dishonesty on the subject has gotten to be such a pattern that PolitiFact took the unusual step of nailing him with a “false” rating.

“The 2003 law is not obscure,” the fact-checkers write. “Becerra, then representing a district in California, voted against the measure, as did 132 other Democrats out of the 205 then serving in the chamber.”

If anyone should remember the law, it’s a man who served in the House when it passed.

Meanwhile, Biden may not know what to call moms—but he’s certainly doing his part to make sure there are less of them. His push for taxpayer-funded abortion was another subject that put Becerra on the hot seat.

When Sen. Mike Braun, R-Ind., asked if he was part of omitting the Hyde Amendment from the Health and Human Services Department portion of the budget, the secretary smugly answered, “Remember, senator, that President Biden, before he became president, he said that he was against maintaining the Hyde Amendment. The budget is a reflection of what the president has said in the past … “

But it’s not a reflection of most Americans’ values, Senate Minority Leader Mitch McConnell, R-Ky., was careful to point out on the floor. He’s keeping his radical campaign promise, McConnell said, “[and] shrug[ing] off a commonsense precedent upheld by administrations of both parties for more than 40 years … ”

That decision “aligns him with an increasingly radical consensus among elected Democrats. But it puts him way out of step with the clear majority of Americans who oppose taxpayer-funded abortion. Mr. President,” McConnell said, “the administration’s budget request continues to make headlines for all the wrong reasons. But its plan to sell out on longstanding protections for the most vulnerable Americans might just be the lowest of the low.”