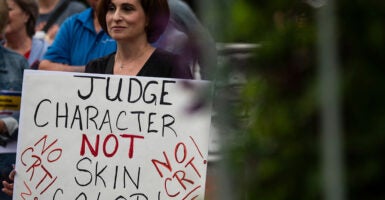 Public school teachers in Mentor, Ohio, are being trained to apply “social and racial justice lenses” to their jobs, according to Parents Defending Education. Pictured: A school parent makes her message clear June 12 during a meeting of the Loudoun County, Virginia, school board. (Photo: Andrew Caballero-Reynolds/Getty Images)

A school district in Ohio instructed teachers on becoming “co-conspirators” in “anti-racism” while teaching a “curriculum rooted in whiteness,” according to a concerned resident’s presentation to the group Parents Defending Education.

Mentor Public Schools in Mentor, Ohio, told teachers in a training program, titled “Curriculum for Social Justice: Examining What We Teach and How to Critique It,” that they could apply “social and racial justice lenses” to their jobs, according to a report from Parents Defending Education. The program appears to be from the website BetterLesson.

In a presentation slide titled “Today’s Sessions,” the report from Parents Defending Education says, the training session asked teachers to consider “How can I be a co-conspirator while using a curriculum rooted in whiteness?”

According to the presentation, “co-conspirator” is defined as “a person whose actions combat racism through direct challenge to or subversion of racist structures and institutions,” Parents Defending Education reported. It says teachers should be “agent[s] of change” who are willing “to unlearn in order to relearn” and use “an auditing tool to evaluate and challenge content.”

Teachers were told to re-evaluate the curriculum they teach their students, because “it’s important to remember that our education system has been founded on historically racist practices, including silencing those from disenfranchised communities.”

Parents Defending Education’s director of outreach, Erika Sanzi, criticized the Mentor school district as “a textbook definition of a hostile work environment” in a statement provided to the Daily Caller News Foundation.

“Considering the sources used in this presentation, none of it is surprising but this is a quintessential example of how teachers are being bombarded by critical race theory during professional development,” Sanzi said.

Another slide shows a diagram, labeled “Becoming Anti-Racist,” which divides individuals into a “fear zone,” a “learning zone,” and a “growth zone.” Teachers are asked to assess where they see themselves on the anti-racism scale.

“Anti-racism” is a term popularized by a prominent proponent of critical race theory, Ibram X. Kendi, whose books include “How to Be an Antiracist” and “Stamped: Racism, Antiracism, and You.”

Critical race theory holds that America is fundamentally racist, but also teaches people to view every social interaction and person in terms of race. Its adherents pursue “anti-racism” through the end of merit and objective truth and the adoption of race-based policies.

“There is no such thing as a nonracist or race-neutral policy,” Kendi writes in “How to Be an Antiracist,” adding:

Every policy in every institution in every community in every nation is producing or sustaining either racial inequity or equity between racial groups.

In a slide titled “Self Examination,” the training for teachers in the Mentor district states that everyone has the potential “to be implicit or complicit in the systems we navigate which further perpetuates racism.” It instructs educators to question the role they play and to sharpen their “anti-bias lens” as they “continue becoming a co-conspirator and anti-racist,” according to Parents Defending Education.

In a slide called “Explaining HOW to Critique,” teachers are provided with instructions to evaluate and alter curriculum, which includes examining “the effects of capitalism on the environment and biological systems” and “the oppressive nature behind enforcing ‘Standard English.’”

The material obtained by Parents Defending Education links to an organization called RadicalMath that, according to its website, “empowers educators to address issues of social and racial justice in math classrooms through curriculum, lesson planning resources, and professional development opportunities.”

Mentor Public Schools did not respond to a request for comment from the Daily Caller News Foundation.