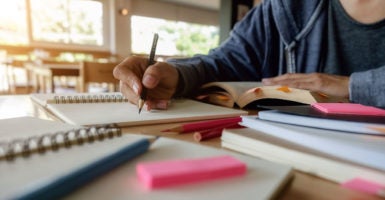 "This [program] has allowed us to pick a school where we felt like the environment is conducive to more ... learning," LIsa Davis says. (Photo: Getty Images)

A North Carolina woman with three grandchildren in the state’s school voucher program says she isn’t too proud to beg the governor not to reduce funding and phase it out, as he proposes.

“I would just really hope to beg him not to make this cut to this program,”  Lisa Davis told The Daily Signal.

Davis is among parents and advocates of school choice who hope to reverse a decision by Gov. Roy Cooper to scrap the North Carolina Opportunity Scholarships program, which allows low-income families to send their children to a better school.

The proposed two-year budget from Cooper, a Democrat, would reduce funding for the $54.8 million initiative, “to reflect a gradual elimination of the program.” Under the plan, new scholarships enabling students to leave a failing public school would not be awarded in 2019 and 2020.

The program, administered by the State Education Assistance Authority, allows up to $4,200 for low-income families to cover a child’s private school tuition, transportation, supplies, and other expenses.

Davis is the grandmother of nine children, four of whom attend Our Lady of Perpetual Help, a Catholic school in Rocky Mount, North Carolina.

Three of her grandchildren by two daughters rely on the voucher program, including two girls who are completing first grade.

“Very different children,” Davis told The Daily Signal in an interview. “One is on the third- and fourth-grade reading level. One is struggling. She has had an amazing year with the benefits of having this scholarship.”

“Otherwise, she would be in a larger classroom, she wouldn’t have as much one-on-one attention,” the grandmother said. “And this has allowed us to pick a school where we felt like the environment is conducive to more of her learning.”

The Opportunity Scholarships Program disproportionately supports minorities, with 31% of participating students African American. A total of 9,640 students are currently enrolled, with 452 participating schools.

Job Creators Network, a national entrepreneurial advocacy organization that supports school choice, began a petition drive and media campaign against the move, buying space on three billboards in the state.

Both daughters’ families benefit from the Opportunity Scholarships, Davis told The Daily Signal.

“As the grandmother of these children [in the program], I feel extremely blessed that they have been able to get this assistance. Otherwise, I think their outcomes would have been different,” she said.

The grandson diagnosed with Asperger’s syndrome, which makes social interaction difficult, was able to get a disability scholarship along with the Opportunity Scholarship.

“That will allow him to have a little one-on-one help for him. He’s very intelligent, just sometimes misses the social cues. And I think being in a school like this will help,” Davis said.

But critics of the program say it doesn’t provide accountability for academic performance and wastes money.

Public Schools First NC, a statewide nonpartisan nonprofit that advocates “one unified system of public education that will prepare each child for productive citizenship,” lists detailed concerns about vouchers.

Created in 2013 by the North Carolina General Assembly and launched the next year, the program is designed to foster more choices in education by giving children the opportunity to attend schools outside public school systems.

Eligibility guidelines are the same as for the federal program offering free or reduced-price lunches.

Brian Jodice, vice president of Parents for Educational Freedom in North Carolina, said state lawmakers are committed to the teachers unions and education establishment, and that anger is parents’ overall reaction to Cooper’s proposal to cut and phase out the voucher program.

“Quite frankly, I think parents are a bit floored when they hear this,” Jodice said in an interview with The Daily Signal. “They’re shocked and they’re mad, they’re angry, they’re upset. They want to know why someone would look to take away something that’s so important to them or something they’ve been so desperately seeking.”

Jodice said he is concerned that parents or guardians who apply for their kindergartner to get an Opportunity Scholarship will have nowhere else to turn.

“If there is no new funding available for it, if the governor had his way, those families will be left out in the cold,” Jodice said.

Parents for Educational Freedom in North Carolina, a nonprofit that started in 2005, describes itself as building relationships with parents and establishing a statewide network of school choice advocacy.

The North Carolina House’s budget proposal, passed May 3 by a vote of 61-51, includes funds for a State Education Assistance Authority project to evaluate academic outcomes for students in the voucher program.

The House budget retains funding for the program and enables unspent voucher dollars to be funneled into marketing it. The Senate plan also would continue scheduled budget increases for the program.

In the past, lawmakers voted to add $10 million a year to the scholarship program, despite lower-than-expected interest from parents.

State Rep. Craig Horn, a Republican from Union County who is chairman of the House Education Appropriations Committee, has said the automatic funding increases should stop. “We need to right-size this thing,” Horn said.

Davis, for one, voiced deep concern about the governor’s proposal to cut funding for the scholarship program and ultimately pull the plug on giving needy children some “extra help.”

“I feel like it is vital to the growth of our community. It’s important that we bring in new industry,” the grandmother told The Daily Signal.

“And things like this [the scholarship program] that are available in this state will make even most things better for our local economy.”