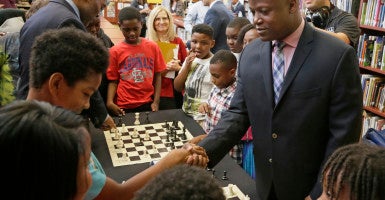 An after-school chess program for 20 elementary and middle schools in the Ferguson-Florissant school district started with a simple conversation between a father and his 10-year-old son.

Nick Ragone, senior vice president and chief communications and marketing officer at Ascension, the nation’s largest Catholic nonprofit health system, says the idea came to him eight weeks ago when his son Frankie, an avid chess player, said he was signing up for chess at school.

The boy then asked if all the schools in St. Louis offered chess to their students.

Not knowing the answer, Ragone looked into chess in St. Louis the next day. He found not only that every school not have a chess program, but also that the Ferguson-Florissant school district had previously expressed interest in creating one.

Ragone took the idea for creating a program to Ascension’s CEO, Dr. Anthony Tersigni, who quickly jumped on board. Within 48 hours of Ragone’s initial conversation with his son, a program that will benefit over 400 children in the St. Louis, Mo. area this fall was born. (This paragraph orignally misidentified the Ascension CEO as Robert Henkel.) “It’s been a longtime goal of ours to bring after-school chess clubs to all the schools in our district,” Joseph Davis, superintendent of the district, said in a statement. “It’s a terrific opportunity to instill confidence in our children and provide them with lifelong skills that will enable future successes.”

Earlier this month, students, faculty, and three chess grandmasters—the highest title for a chess player—gathered in the library at Walnut Grove Elementary in Ferguson, Mo., to announce the partnership between Ascension and the Chess Club and Scholastic Center of St. Louis, who will offer the chess club.

Maurice Ashley, the first and only African-American chess grandmaster, was on hand for the press conference.

“I’m proud to encourage kids to take part in such a positive, empowering activity,” Ashley said.

Ashley, along with the two other chess grandmasters, spent the day teaching students how to play the game.

“The kids absolutely ate it up and loved it and were so engaged,” Ragone said. “This is the single coolest day of my professional working life that I’ve ever had.”

The chess club will run for 10 weeks this fall, meeting once per week. Ascension will fund the program, removing a cost that could have deterred schools, parents, and children from involvement in the extracurricular activity. A certified chess instructor will lead the meetings. Starting this fall, school children in the Ferguson-Florissant school district in Missouri will be able to participate in an after-school chess program. (Photo: Ascension)

“We think it’s a pretty unique partnership with public, private, and nonprofit [organizations] to do something really, really special for kids in this area,” Ragone says, adding that including chess in school curricula will help students with math and reading skills, as well as strategic planning and decision-making. Indeed, research has shown that playing chess has been linked to academic achievement.

“[Chess] reinforces logical thinking, discipline, attention to detail, strategic planning and complex problem solving,” said Tony Rich, executive director of the Chess Club and Scholastic Center of Saint Louis, in a press statement. “We know that children who learn chess tend to perform better at school, and it’s a game they can play for the rest of their lives.”

Ragone says the chess program will be monitored to see if participants improve in academics or other areas such as patience and discipline. It is his hope that the program will ultimately expand to other cities. Ideally, he would like other businesses to get involved in similar partnerships.

“Hopefully it will create a lifelong love of chess and a love of learning,” Ragone said. “It’s the beginning of the program. We’re hoping it goes really well and that we expand it to every school district in the St. Louis area.”