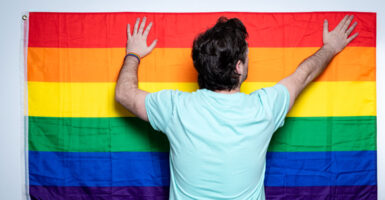 It’s not just the religious who will be persecuted by gender identity policies in schools. Anyone who believes in the indisputable science of the sexual binary will be subject to penalty. (Photo: Jon Vallejo/Getty Images)

Schools should be places where students enjoy free speech to express and hear different ideas in pursuit of truth. But in Virginia’s Loudoun County and other school districts across the country, school boards are shutting down debate before it even happens by requiring affirmation of an individual’s self-asserted gender identity.

But contrary to Sheridan’s statement, these types of policies impose radical gender ideology as orthodoxy by compelling speech and eliminating dissent.

One proposal states that at the request of a student, school staff must use the name and pronoun corresponding to a student’s self-asserted gender identity. Staff and students “who intentionally or persistently refuse” to use that name or pronouns would be in violation of the policy.

Although the policy does not state consequences for such violations, recent events in Loudoun County’s public school system offer a preview.

In May, elementary gym teacher Byron “Tanner” Cross expressed his dissent at a school board meeting and subsequently was suspended.

During a “public comment” time, Cross, who is a Christian, said: “I’m a teacher, but I serve God first. And I will not affirm that a biological boy can be a girl and vice versa because it is against my religion. It’s lying to a child. It’s abuse to a child.”

Cross took the school board to court, where a judge ruled that his  constitutional rights likely were violated and ordered the school system to reinstate him while the lawsuit continues.

But it’s not just the religious who will be persecuted by gender identity policies in schools. Anyone who believes in the indisputable science of the sexual binary will be subject to penalty under such policies.

This is contrary to the purpose of education. Policies that restrict speech and inquiry and impose a single viewpoint on students stifle their intellectual inquiry rather than encourage it.

In addition to squelching students’ curiosity, these policies make students suffer in other ways by turning single-sex sports and spaces, such as restrooms and locker rooms, into co-ed environments.

These policies require a student only to assert an internal sense of gender identity to gain access to a single-sex facility. This deprives students, especially girls, of privacy and safety.

In Georgia, a 5-year-old girl was sexually assaulted by a boy who identified as gender-fluid and was allowed into the girls’ restroom.

With all the outrage over sexual and domestic abuse in recent years, we should be creating policies that make girls less vulnerable, not creating more risks.

Allowing males who identify as girls to compete in girls sports eliminates fairness, equality, and opportunity.

Currently, about 300 U.S. high school boys can beat Allyson Felix’s personal best in the 400-meter sprint, although she is the most decorated athlete in World Athletics Championships history and a six-time Olympic gold medalist. Even if those biological males were taking cross-sex hormones, two years on estrogen does not erase their competitive advantage.

Letting biological males compete in women’s sports forces girls to forfeit scholarships and opportunity designated for them under the federal law known as Title IX.

A national movement is coalescing around the Promise to America’s Children, which outlines 10 principles for protecting children’s minds, bodies, and relationships with their parents. Included are freedom of speech and freedom of conscience in the classroom, as well as fairness in girls sports.

Numerous state lawmakers are working on legislation to protect students and school staff from harmful gender policies of woke school boards such as the one in Loudoun County, Virginia.

Eight states have passed legislation to protect women’s sports. Similar bills have been introduced in another 23 states, where they face stiff opposition.

Governors such as Kristi Noem in South Dakota and Bel Edwards in Louisiana in effect have opposed bills banning biological males from competing in women’s sports. When Ohio state Rep. Jena Powell proposed an amendment to protect women’s sports, chaos ensued on the House floor as Democrats yelled and pounded their desks.

Defending women’s sports is only part of the solution. Even where female students are protected from unfair competition and the invasion of privacy, speech still may be compelled by local school policies. At least five states have introduced legislation to protect teachers and students from curriculum that includes divisive critical race theory. States should consider similar policies prohibiting the requirement of any curriculum or school policy that treats radical gender ideology as orthodoxy.

For elected leaders such as Brenda Sheridan in Loudoun County, supporting woke policies that impose gender ideology as orthodoxy renders vocal support for “differing opinions” no more than lip service.

We need leaders who will stand up for free speech in public schools.