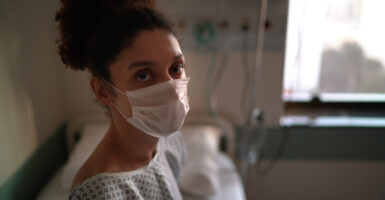 The “gender affirmative” approach requires that doctors support a patient’s disordered perception of her body and even physically change her appearance to conform to the disorder. (Photo: FG Trade/Getty Images)

During the past presidential election, you may remember seeing black yard signs with lists of creed-like statements written in rainbow text. The creeds included claims like “science is real.” All Americans should agree with this statement.

And yet, contrary to this pithy creed, any law that classifies gender identity as a protected class under civil rights law denies science. The Equality Act and the Fairness for All Act turn the scientific reality that there are only two sexes into the legal equivalent of racism.

The Equality Act has turned civil rights law from a shield intended to protect racial minorities from discrimination into a sword that compels conformity to subjective viewpoints on sexual orientation and gender identity.

These state- and local-level policies allow male athletes to compete against females in sports, even though studies show biological males retain a competitive advantage over females even after two years of taking estrogen.

The Fairness for All Act drafters touted it as a reasonable compromise meant to mitigate the harms of the Equality Act. It includes religious exemptions and preserves the Religious Freedom Restoration Act, which the Equality Act would nullify.

However, this approach did not protect religious freedom in Utah, where legislators passed a similar compromise bill.

Unsatisfied with the compromise, gender identity activists helped pass a ban on counseling that would have helped children struggling with gender dysphoria.

The rule discriminates against counselors who seek to help patients reconcile with their biological sex and allows only gender-affirming counseling that supports chemical and surgical transition.

These methods overlook the fact that 88% to 98% of those struggling with gender dysphoria will accept their biological sex after going through puberty, according to the fifth edition of the American Psychiatric Association’s “Diagnostic and Statistical Manual of Mental Disorders.”

Enshrining the fundamentally flawed and radical idea that a person can change sex—at any age—as a civil right threatens the safety and freedom of all Americans, religious or not.

The notion that a person can change his or her sex rejects science. This was on full display in the Senate Judiciary Committee’s hearing on the Equality Act. During the hearing, Sen. John Kennedy, R-La., asked Alphonso David, president of the Human Rights Campaign, “Are there more than two sexes, in your opinion?” David replied, “It’s not limited to two.”

While David’s answer sent shockwaves through social media, it should not have come as a surprise. Gender identity advocates regularly insist that those who believe that there are only two sexes—male and female—overlook the science of intersex conditions. But David and other activists’ references to intersex people do not debunk the sexual binary.

“Intersex conditions” or disorders in sexual development are statistical rarities occurring in approximately 1 out of every 5,000 births, according to Ryan Anderson’s research.

Anderson’s Amazon-banned book, “When Harry Became Sally: Responding to the Transgender Movement,” states the medical community considers these atypical expressions of the sexual binary, not a third sex or the result of a third gonad.

Because gender ideology flatly rejects science, enshrining it into federal law means no amount of religious liberty exemptions will prevent the damage caused by such policies like the Equality Act.

Women and children—religious or not—will lose privacy, safety, and fairness in public and federally funded single-sex facilities and programs, which exist because of biological differences between men and women.

Medical professionals—religious or not—who treat individuals struggling with gender dysphoria will lose the freedom to treat patients according to the best medical and scientific evidence.

Laws that threaten the freedom of doctors and counselors harm struggling individuals. By reducing their options for care, these laws minimize patients’ chances to flourish in mind and body.

Denying reality in the name of “gender-affirming care” causes harm, not healing. While the Fairness for All Act may protect doctors and counselors inside religious institutions, it will expose those in secular institutions to punishment.

People may be free to adopt radical new ideas about gender for themselves, but if activists have their way and the Senate passes the Equality Act, the federal government will have power to pressure Americans into denying science under threat of punishment.

Even good faith compromises like the Fairness for All Act suppress the freedoms of all gender identity dissenters outside of religious institutions. That is hardly fair at all.

America is at its best when all citizens can seek and live according to the truth. Disagreements between gender identity advocates and Americans who know there are only two sexes will continue. Congress should allow them to, by rejecting the Equality Act and the Fairness for All Act that shut down any conversation.

Most importantly, Congress should affirm that “science is real.”