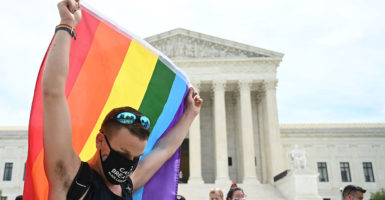 A demonstrator waves a rainbow flag in front of the Supreme Court, which ruled Monday that federal law protects LGBT individuals from discrimination by employers. (Photo: Jim Watson /AFP/Getty Images)

The Supreme Court’s landmark decision that federal laws against discrimination based on sex also protect LGBT individuals has liberals and conservatives alike considering the effects on employment polices across America.

In his majority opinion, Justice Neil Gorsuch wrote that “an employer who fires an individual for being homosexual or transgender fires that person for traits or actions it would not have questioned in members of a different sex.”

The American Civil Liberties Union tweeted: “There’s no doubt today’s SCOTUS ruling is a major victory for LGBTQ rights. To achieve full equality in the workplace, we must fill in the gaps.”

Gorsuch and Kavanaugh both were appointed to the court by President Donald Trump.

The case, R.G. & G.R. Harris Funeral Homes v. Equal Employment Opportunity Commission, began after the family-owned funeral business in Michigan refused to allow an employee to dress as a member of the opposite sex when meeting with grieving family members, in violation of a sex-specific dress code, Alliance Defending Freedom said in a press release.

“Redefining ‘sex’ to mean ‘gender identity’ will create chaos and enormous unfairness for women and girls in athletics, women’s shelters, and many other contexts,” Bursch said in a written statement, adding:

Civil rights laws that use the word ‘sex’ were put in place to protect equal opportunities for women. Allowing a court or government bureaucrats to redefine a term with such a clear and important meaning undermines those very opportunities—the ones the law was designed to protect.

Ryan T. Anderson, a senior research fellow in American principles and public policy at The Heritage Foundation, wrote in an April paper that leaving the determination of sex and gender identity open to interpretation would put employers at a disadvantage.

“Employers would be prevented from protecting their employees’ privacy and would be exposed to significant liability. For example, they would have to cover objectionable medical treatments in their employer-sponsored health care plans,” Anderson wrote.

Carrie Severino, president of the Judicial Crisis Network, said the high court’s decision is a “hijacking of textualism.”

Textualism is the perspective of legal scholars who say judges should make decisions based on the original text and meaning of the Constitution or laws.

“Justice [Antonin] Scalia would be disappointed that his successor has bungled textualism so badly today, for the sake of appealing to college campuses and editorial boards,” Severino tweeted, referring to Gorsuch.

“You can’t redefine the meaning of words themselves and still be doing textualism,” she wrote. “This is an ominous sign for anyone concerned about the future of representative democracy.”

But activists on the left celebrated the decision.

“This is a landmark victory for LGBTQ equality,” Alphonso David, president of the Human Rights Campaign, said in a prepared statement. “No one should be denied a job or fired simply because of who they are or whom they love.”

“Today’s momentous Supreme Court ruling affirms that all Americans, regardless of who you are or whom you love, are protected from discrimination in the workplace under federal law,” Pelsoi tweeted. “Thank you to all whose activism & courage made this victory possible.”

Sarah Kate Ellis, president and CEO of the Gay and Lesbian Alliance Against Defamation, tweeted that the Supreme Court decision “gives us hope that as a country we can unite for the common good and continue the fight for LGBTQ acceptance.”

“Discrimination against LGBTQ+ Americans in the workplace is not only morally unconscionable, but now it’s against the law,” Sen. Cory Booker, D-N.J., tweeted. “Today’s ruling from the Supreme Court is a huge and historic victory in the struggle for true equality.”