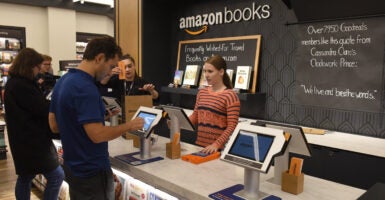 Amazon has removed from its cybershelves a book with “thoughtful answers to questions” about transgenderism—without informing the author and without explanation.

“When Harry Became Sally: Responding to the Transgender Moment” by Ryan T. Anderson, a former senior research fellow at The Heritage Foundation and now president of the Ethics and Public Policy Center, contends that ideology is more of a factor than biology in American society’s acceptance of transgenderism.

Anderson said he didn’t realize Amazon had pulled the book down until someone who sought to buy it told him it was unavailable.

In his book, published in 2018, Anderson discusses gender dysphoria, the feeling that one’s gender identity is different from one’s biological sex. He asks whether some cases of gender dysphoria could be linked to “social hostility to people who don’t conform to gender norms or who have same-sex attractions.”

“We need to respect the dignity of people who identify as transgender, but without encouraging children to undergo experimental transition treatments,” Anderson wrote.

He says in the book—whose title is borrowed from that of the 1989 romantic comedy film “When Harry Met Sally”—that the best therapies focus on helping people accept themselves and their bodies.

The book tells stories of people who have detransitioned—reversing their gender transition—and how they found themselves no better off. Other stories are about adults who were encouraged to transition as children, but later regretted undergoing those life-altering procedures.

Rod Dreher, senior editor at The American Conservative, criticized Amazon’s move, writing Monday how a company with the power to prevent books on certain themes from being sold is a dangerous attack on the free marketplace of ideas.

“[Amazon CEO] Jeff Bezos will sell you Hitler’s autobiography, because he correctly trusts readers to understand that malignant book. But he will not sell you a book by the head of a major American think tank, making an argument critical of gender ideology, because … why?” Dreher asked rhetorically.

Amazon didn’t responded to a request for comment from The Daily Signal about the removal of Anderson’s book, but is currently selling a pro-transgender book, “Let Harry Become Sally,” a response to Anderson’s book.

Anderson’s book remains available online at Barnes & Noble, Books-A-Million, eBay, and other outlets. He had this to say about the removal of his book from Amazon:

‘When Harry Became Sally: Responding to the Transgender Moment’ was released exactly three years ago (Feb. 20, 2018, to be precise), it was attacked twice on The New York Times op-ed page. The Washington Post ran a hit piece on it that they then had to entirely rewrite to fix all their errors. It was obvious the critics hadn’t read the book.

People who have actually read my book discovered that it was a thoughtful and accessible presentation of the state of the scientific, medical, philosophical, and legal debates.

Yes, it advances an argument from a certain viewpoint. No, it didn’t get any facts wrong, and it didn’t engage in any name-calling.