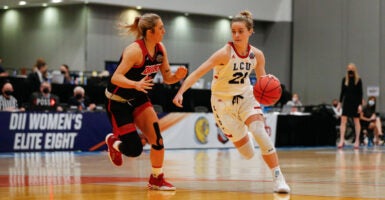 An amendment to protect women's sports in the Ohio House succeeded with a 54-40 vote. Pictured: Allie Schulte of the Lubbock Christian Lady Chaps drives the lane against the Drury Panthers during the Division II Women’s Basketball Championship March 26, 2021, in Columbus, Ohio. (Photo: Jay LaPrete/NCAA Photos/Getty Images)

It’s hard to believe this ruckus took place in what is supposed to be the deliberative, rule-making body for the state of Ohio. Where do they think they are? A zoo? A construction site? A day care? It’s almost (almost) maddening enough to make me thankful unelected bureaucrats do most of America’s legislating.

Powell courageously pushed through to offer the amendment despite Democrats’ rude interjections. The amendment succeeded in a 54-40 vote, and the Ohio House voted 57-36 to pass Senate Bill 187 through to the Senate.

“In the two and a half years that I’ve been in the Legislature, that was probably one of the worst outcries that we’ve seen. It’s very rare to have something like that on the Ohio House floor,” Powell said. “I can’t speak for the Democrats, but I know many of the Republicans thought it was completely out of turn.”

Since pre-Colonial times, deliberative bodies like the Ohio House have followed basic procedures that ensure everyone gets a turn to speak.

“When the Democrats speak and we disagree with them, we allow them to speak, and then you have the ability to do rebuttal on the floor. Instead, he had a childish outburst and continued doing so until the speaker cut him off,” Powell said.

Powell surmised “the left gets frustrated” and so those on the left “speak out in ways that are very inappropriate.” Even where it is dominant, it seems the left gets frustrated by the mere fact that its opponents have freedom of speech. That’s why, through controlling definitions, censoring speech platforms, and canceling individuals, the left is trying to vigorously curtail conservatives’ freedom of speech.

It’s sad that legislators are so imprisoned by a false ideology that they cannot endure a brief description of reality. And it’s sad that so many grown Americans lack the self-control to listen to an opposing point of view with civility and respect.

At first, the NCAA threatened to punish states that protected women’s sports by siting tournaments and championships elsewhere. But the NCAA’s threatened boycott fell apart, simply because too many states have passed women’s sports legislation for it to enforce it.

The Ohio Senate will likely pass the bill to save women’s sports, but Gov. Mike DeWine, a Republican, seems opposed. Powell said, “Governor DeWine’s response is from an individual who’s scared of the woke left.”

Woke corporations like the NCAA have employed the same tactics against other governors in an attempt to impose the transgender ideology, but state legislators have shown they are willing to override those vetoes. If DeWine vetoes this commonsense bill and the Ohio Legislature overrides his veto, Powell said, “it wouldn’t be the first time.”