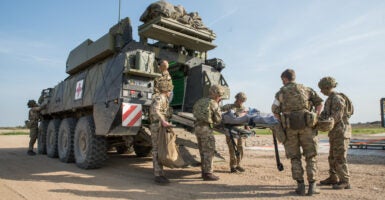 Soldiers take part in a NATO joint military exercise of British, Estonian, and Danish forces at the Tapa Army Base in Estonia on Oct. 1. (Photo: Raigo Pajula/ Agence France-Presse/Getty Images)

As the economic impact of the pandemic comes more clearly into focus over the next few years, maintaining defense spending will require sustained political will.

The recently released NATO Secretary-General’s Annual Report detailed a continuing trend of NATO allies investing in defense. According to the report, 2020 marked the sixth consecutive year of defense spending increases among non-U.S. NATO members, with “an increase in real terms of 3.9% from 2019 to 2020.”

As an intergovernmental security alliance, NATO is only as strong as its member states. Weak defense spending in Europe beginning with the end of the Cold War led to a significant loss of capabilities and embarrassing gaps in readiness for NATO allies, and American presidents of both political parties have long called for increases in defense spending by NATO allies.

Article 3 of the treaty that established NATO states that members will, at a minimum, “maintain and develop their individual and collective capacity to resist armed attack.”

Only a handful of NATO members can say they have lived up to that.

That increase, alongside a previous commitment of a $2 billion bump, means the U.K. will invest $24.1 billion additional in defense through 2024.

The new funding for the U.K. Defense Ministry will be utilized in part for acquisitions, including frigates, Type 32 warships, and the U.K.’s Future Combat Air System. Furthermore, the U.K. is standing up a Space Command, as well as an Artificial Intelligence Center, which the additional funding will support.

Likewise, Germany is increasing defense spending, with a 3.2% increase in 2021 from 2020, rising to $63.8 billion. France, for its part, has safeguarded planned defense spending increases of $2 billion in 2021.

That defense budgets in Europe began turning around in 2014 is no coincidence. Heightened threat perceptions vis-a-vis Russia in particular led European leaders to invest more in security.

While Russia remains the preeminent threat to European security, many nations in recent years have singled out a rising threat from China as a rationale for increased defense and security investments.

Those threats have led non-NATO U.S. allies Finland and Sweden also to increase defense budgets. Finland will spend 2.2% of its budget on defense in 2021, and Sweden is increasing its defense budget by 40% from 2021 to 2025, the nation’s largest defense-spending increase in 70 years.

In light of these increases, it’s easy to become complacent and think this positive trend will continue unabated, but the real impact of COVID-19 remains a specter that could put at risk necessary defense investments in Europe.

A botched vaccine rollout on the Continent overseen by the European Union has led to diverging outcomes for the U.S. and EU. A third wave of COVID-19 infections has resulted in new lockdown measures in a series of European nations.

Economic growth in the U.S. is currently projected to be nearly double that of the EU in 2021. A dour summer could be ahead for millions in Europe.

On both sides of the Atlantic, massive government spending over the past year is certain to create pressure on budgets in the coming decade, including defense budgets.

Take for instance Poland, long one of NATO’s most robust investors in defense.

In January, Defense Minister Mariusz Blaszczak warned, “The COVID-19 pandemic will most likely have an impact on national security policies, including defense budgets, but we remain committed to keeping our defense spending above the required 2% of gross domestic product.”

Even the U.K., which is increasing defense spending, is planning significant cuts to offset expensive acquisitions. The U.K.’s recently released Review of Security, Defence, Development and its Foreign Policy and Defence Command Paper call for significant capability cuts, including a likely reduction in F-35 procurement from the planned 138 and the early retirement of C-130J transport aircraft, along with reductions in the U.K. army, reducing it to 72,500 troops by 2025 (from 82,000 currently), the smallest it has been since 1714.

Decisions like those being undertaken by the U.K. Ministry of Defense are driven by budget realities, rather than a lessening of threats.

Threats faced by the transatlantic alliance are very likely to metastasize across the coming decade, with a revanchist Russia and self-assured China engaging in increasingly brazen efforts to undermine transatlantic unity and remaining an acute, multifaceted, and ongoing security challenge.

Successfully meeting this challenge will require sustained defense investments, leaders willing to make a public case for defense spending, and preparedness by those leaders for the budgetary pressures that the COVID-19 pandemic aftermath will bring soon.