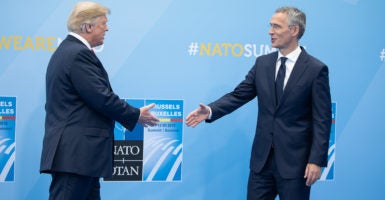 NATO Secretary-General Jens Stoltenberg says allies are stepping up in their commitments to defense spending, and gives some of the credit to President Donald Trump.

Stoltenberg also told an audience at The Heritage Foundation in Washington on Friday that the international defense alliance likely would not name its headquarters after Sen. John McCain, the veteran Arizona Republican and prominent defense hawk who died Aug. 25.

“President Trump has been outspoken on this issue, and I have thanked him for his leadership on defense spending,” Stoltenberg said at the leading conservative think tank’s Capitol Hill headquarters. “Since President Trump took office, NATO allies across Europe and Canada have spent an additional $41 billion extra in U.S. dollars on defense.”

British Member of Parliament Tom Tugendhat asked Stoltenberg to name NATO’s headquarters in Brussels after McCain, who had been a strong internationalist.

I’ve written to @jensstoltenberg calling for the new @NATO headquarters to be named after @SenJohnMcCain. Few have given as much to our alliance in combat, captivity, and Congress. He reminds us what we should be. Other former Sec Gens are supporting. #NATOMcCainHQ pic.twitter.com/evRD3sUXdq

“NATO allies and I personally very much respected the late Sen. John McCain for many reasons, but not the least because of his very strong support to NATO and to the transatlantic bond,” the NATO chief said, noting that the organization doesn’t have a tradition of naming buildings after politicians.

“So, I am certain we will be able to honor John McCain, but not necessarily through naming a building, and actually honor John McCain every day by the fact that we stand together in NATO and deliver a strong transatlantic deterrence and defense,” Stoltenberg said.

Stoltenberg said NATO benefits the United States by maintaining peace and stability in Europe; by supporting fundamental American values, such as democracy and free enterprise, across the world; and by boosting U.S. military power. He said:

But it is clear that allies need to invest more in our shared security. All NATO allies have agreed to stop cuts to defense budgets, to increase spending, and to move spending to 2 percent [of gross domestic product] on defense by 2024. We are making real progress. Last year, NATO allies across Europe and Canada boosted their defense budgets by a combined 5.2 percent in real terms, the biggest increase in a quarter of a century.

This year will be the fourth consecutive year of rising defense spending. The trend was down. Now the trend is up. But we still have a long way to go.

As a candidate for president, Trump called NATO “obsolete” and criticized allies for not paying their fair share. After he became president, Trump said he didn’t think NATO was obsolete after all.

Stoltenberg said that since the Sept. 11, 2001, terrorist attacks on the United States, hundreds of thousands of European and Canadian troops have fought alongside the U.S. military in Afghanistan as part of the NATO alliance.

He said the alliance remains in Afghanistan to prevent it from becoming a “safe haven for internationalist terrorists.”

He also spoke at length about Russian aggression, noting: “NATO is and will remain a defensive alliance. That is the case for all allies.”

Referring to Russian propaganda and fake news, Stoltenberg said the best defense is a “free and independent media” in countries across the world.

But Russia’s military aggression against its neighbors in Georgia and Ukraine is a major reason NATO allies have invested more in defense for the first time since the end of the Cold War, Stoltenberg said.

“NATO is not mirroring, tank by tank or plane by plane, what Russia is doing, but we are responding when we see the security challenges are changing with an assertive Russia,” he said.

Still, Stoltenberg said, NATO and its member nations must be willing to engage in talks with Russia:

For us, there is no contradiction in being strong and firm in our approach with Russia, as we are, and at the same time seeking dialogue and try to reduce tension with Russia.

Russia will not go away. Russia will remain our biggest neighbor. … We will all be losers if we move toward a new Cold War and new arms race.