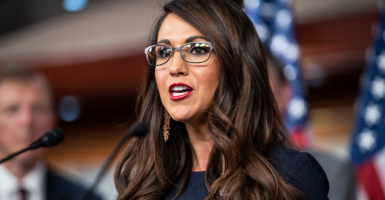 A group of Republican lawmakers are calling on the Biden administration to reassess the U.S. Coast Guard’s policy for “religious exemptions from the COVID-19 vaccination order,” which will likely force the involuntary discharge of a service member whom President Joe Biden thanked last month for his “heroic work.”

“Service members that have not obtained a COVID-19 vaccine risk an involuntary administrative separation. This policy has resulted in hundreds of service members from all branches getting involuntarily discharged,” the letter said.

Loesch, who reportedly saved a 94-year-old wheelchair-bound woman and her husband by kicking through a wall and then hoisting them into a helicopter, is set to be discharged from the U.S. Coast Guard because he did not get the COVID-19 vaccine. He had sought and was denied a religious exemption.

“Petty Officer Second Class Zach Loesch is an American hero, and he deserves to be treated as such. Due to the vaccine mandate, his rescue mission responding to Hurricane Ian may be his last, as he is set to be involuntary discharged in 30 to 60 days,” Boebert told The Daily Signal in a statement.

“The federal government’s failure to respect religious freedom and allow these exemptions is causing the military to lose talented individuals like Petty Officer Loesch,” Boebert added. “It’s time to end these mandates and support our troops’ religious freedom!”

Loesch has also spoken out about the vaccine mandate and its impact on his job, which he said he feels he was “born to do.”

“If I had asked any of the people I saved yesterday if they wanted to come with me even though I am unvaccinated, every single one of them would have said ‘yes,’” Loesch said.

“It just sucks that [Biden] thanked me yet the vaccine mandate is what’s kicking me out. I just love my job, and I’m really good at it. It sucks. I feel like this is the job that I was born to do,” he added.

Nearly 20,000 service members are set to be discharged over the next few months due to the COVID-19 vaccine mandate, Fox News reported. Biden said the COVID-19 pandemic was over during an interview with CBS last month.

The Department of Homeland Security did not immediately respond to The Daily Signal’s request for comment.

Editor’s Note: The original version of this story misstated the number of Republicans who signed the letter.