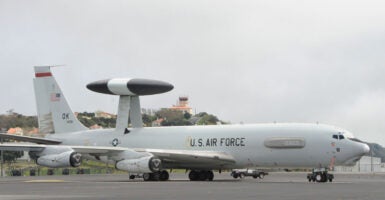 Lajes Field, a Portuguese Air Force base, which the U.S. operates from on the island of Terceira in the Azores, deserves more attention from policymakers. Pictured: A U.S. Air Force E-3 Sentry aircraft lands at Lajes Field. (Photo: Stocktrek Images/Getty Images)

As a global power, the United States has global interests. Currently, those interests are being directly contested by near-peer competitors China and Russia. Effectively meeting these challenges requires attention and care to America’s network of alliances—its greatest asset in the era of great power competition—as well as a strategic outlook regarding forward-deployed forces and key military installations.

One strategically valuable installation that deserves more attention is Lajes Field, a Portuguese Air Force base that the U.S. operates from on the island of Terceira in the Azores, a group of nine mid-Atlantic islands. Its location has proven invaluable since World War I, and remains an important component of the U.S. forward-deployed presence.

Over the past decade, a combination of budgetary pressures, relaxed threat perceptions, and a myopic outlook led to severe drawdowns of the U.S. presence at Lajes Field. While throughout the Cold War the U.S. based around 3,000 soldiers at Lajes, today only 178 U.S. Air Force members remain.

As a recent Heritage Foundation report elucidates, the value of Lajes has not lessened despite these reductions:

The base remains an important transit and logistics node. With the longest runway in Europe, Lajes continues to support U.S. Air Force deployments overseas. In March 2020, a B-2 bomber task force arrived in Lajes on its way to begin operations in Europe. In May 2020, six USAF F-35s arrived at Lajes en route from the United Arab Emirates after a six-month deployment in support of Operation Inherent Resolve. Lajes is also the Air Force’s second-largest overseas fuel depot, and the largest in Europe.

In addition to facilitating U.S. deployments, Lajes Field currently serves as a site for weather and communications systems utilized by the U.S. military. Effective satellite coverage for communications and weather forecasting, however, are making these land-based systems less important over time.

In addition to its ongoing functional importance, Lajes Field fills a strategic void as well. The challenge posed by great power rivals necessitates a robust forward presence, which allows U.S. policymakers options in a dangerous world, and blocks rival nations from filling security and economic vacuums.

This led in part to Vice Adm. Andrew Lewis, commander of the Navy’s newly reformed 2nd Fleet, stating in February that he no longer considers the U.S. East Coast an “uncontested” theater.

In addition to Russia’s increased naval activity in the Atlantic—and perhaps more alarmingly—China has made inroads in Portugal’s economy over the past decade.

This, combined with China’s declared interest in opening a presence in the Azores, should cause American policymakers to take a long-term view of the importance of the Azores, and seek creative ways to continue utilizing Lajes Field. The U.S. must also increase the nation’s partnership with Portugal and the people of the Azores.

China continues to invest in Portugal’s economy, and has showcased an interest in acquiring access to portions of the Lajes Field no longer utilized by the U.S. It has also demonstrated an interest in carving out a presence on the Azores (ostensibly for business or scientific purposes).

The U.S. presence at Lajes Field acts as a barrier to significant Chinese involvement in the Azores, and will likely prove an asset that better situates U.S. national security interests in our long-term competition with China. However, to maximize this advantage, the Department of Defense, in consultation with our Portuguese allies, should consider new ways to fully utilize the base at Lajes Field.

Ensuring the Atlantic theater remains secure from encroachment by great power rivals requires strong relations with allies, a robust forward-deployed presence, and a strategic outlook. U.S. policymakers would do well to recognize Lajes Field’s continued importance, while also gazing at horizons 20 to 30 years from now.

A robust presence in this area is a sage investment.