No Slowing Down: After Indictment, Rick Perry to Speak at Heritage 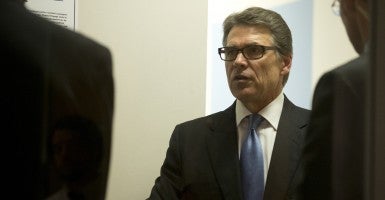 Texas Gov. Rick Perry, under indictment on two felony counts, is in the nation’s capital today to deliver a speech at The Heritage Foundation about the border crisis plaguing his state.

Perry, who has been active and outspoken about immigration, will deliver his remarks at noon (available via live webcast). He’ll also no doubt face questions on the felony charges against him alleging that he abused his power by threatening to veto funding for a Democratic district attorney.

The potential Republican presidential candidate was indicted by a grand jury Friday on charges he abused his office and tried to coerce an elected official to resign.

Since the charges were made public, Perry has made it a strategy to fight back strongly against the allegations, and his trip to Heritage represents one stop during a busy two weeks for the governor, who is looking to boost his profile in advance of the 2016 presidential primaries.

Below, The Daily Signal recaps Perry’s eventful last week, and looks ahead to his future itinerary.

Since the indictment against Perry was announced, several prominent Republicans have spoken out on Perry’s behalf.

Chris Christie, the New Jersey governor and a potential 2016 presidential candidate, released a statement Monday saying he has “complete faith and confidence in Governor Perry’s honesty and integrity.”

The indictment of @GovernorPerry seems politically motivated and ridiculous. Major overreach and an encroachment on his veto authority.

Even a prominent Democrat has doubted the teeth of the indictment.

Unless he was demonstrably trying to scrap the ethics unit for other than his stated reason, Perry indictment seems pretty sketchy.

When Perry was booked Tuesday at the Travis County courthouse, he wore a dark suit and blue tie. He posed for a mug shot with a sly smile, and without his trademark glasses. Before he posed for the mug shot, Perry told reporters he was entering the Austin courthouse with his “head held high.”

>>> Rick Perry Responds to Indictment: ‘I Stood Up for the Rule of Law in Texas’

Following the booking, he called the prosecution a “chilling restraint on the right to free speech,” and vowed to prevail in the case.

After making those strong remarks, Perry went for ice cream, tweeting a picture of himself holding a cone.

In a filing late Tuesday, Perry waived the right to an arraignment hearing, choosing instead to enter a written not guilty plea.

Carrying on a Routine

Perry speaks at The Heritage Foundation in Washington, D.C., today before holding six events in New Hampshire on Friday and Saturday, his first appearance in the state since he dropped out of the last GOP presidential primary in 2011.

Next week, he will appear in Iowa.

Perry will be the keynote speaker for the Heritage event, “The Border Crisis and the New Politics of Immigration,” Thursday morning.

A panel discussion kicks off the 11 a.m. event. The panel features Rich Lowry, editor of National Review; James Jay Carafano, a national security and foreign policy expert at Heritage; Jan C. Ting, a law professor at Temple University; and Kellyanne Conway, founder of The Polling Company Inc., which has a new poll on Americans’ views of  immigration reform.

Perry speaks from noon to 12:30. He will also take questions.

Some 270 people have RSVP’d for the event, to be held in the Allison Auditorium of  The Heritage Foundation, 214 Massachusetts Ave., NE, Washington, D.C.